Having moved to the Czech Republic for a while, I decided I needed to get stuck into a bit of caving, missing my Dales favourites.

Luckily, I was less than an hour from the Moravian Karst, Czechia’s largest cave-bearing area. I got in touch with staff from the Moravsky Kras Protected Landscape Area (similar to a National Park Authority) and plans were made for an speleological feast in the Amatérská system.

Amatérská is Czechia’s longest system, currently reaching over 40km in total length. The resurgence at Punkva Caves is a well-known tourist attraction, with this lower section reaching upstream to the famous Macocha Abyss. Upstream of here, however, remained a mystery until later in the 20th Century.

Around 6km North of the Punkva cave, two separate streams were already well-known to disappear underground – Sloupsky Brook vanishing into the vast Sloupsko-šošůvské network of caves, and the Bila Voda (White Water) stream near Holstejn. Esteemed karst researcher Karel Absolon predicted these fed into the Punkva caves to create a single huge cave system, but it would be many years before his theory was vindicated.

A number of caves were dug out around Holstejn and one of these, Amaterska, got its explorers into the main Bila Voda streamway in 1969. They met with a sump, but divers eventually overcame this and popped out into some huge streamway leading into some seriously extensive cave downstream. A decade or so later, ‘amateur’ cavers (i.e. not representatives of the soviet state, who monopolised access to the cave at the time) managed to tunnel an artificial entrance at the far downstream end of the system, and Novy Amatérská was born. A branch from the Sloupsko-šošůvské caves is now under the spotlight for further extensions.

History lesson completed, it’s time we headed underground. First we need to sign in. The entrance is gated and locked to control access to the fine and vulnerable formations. 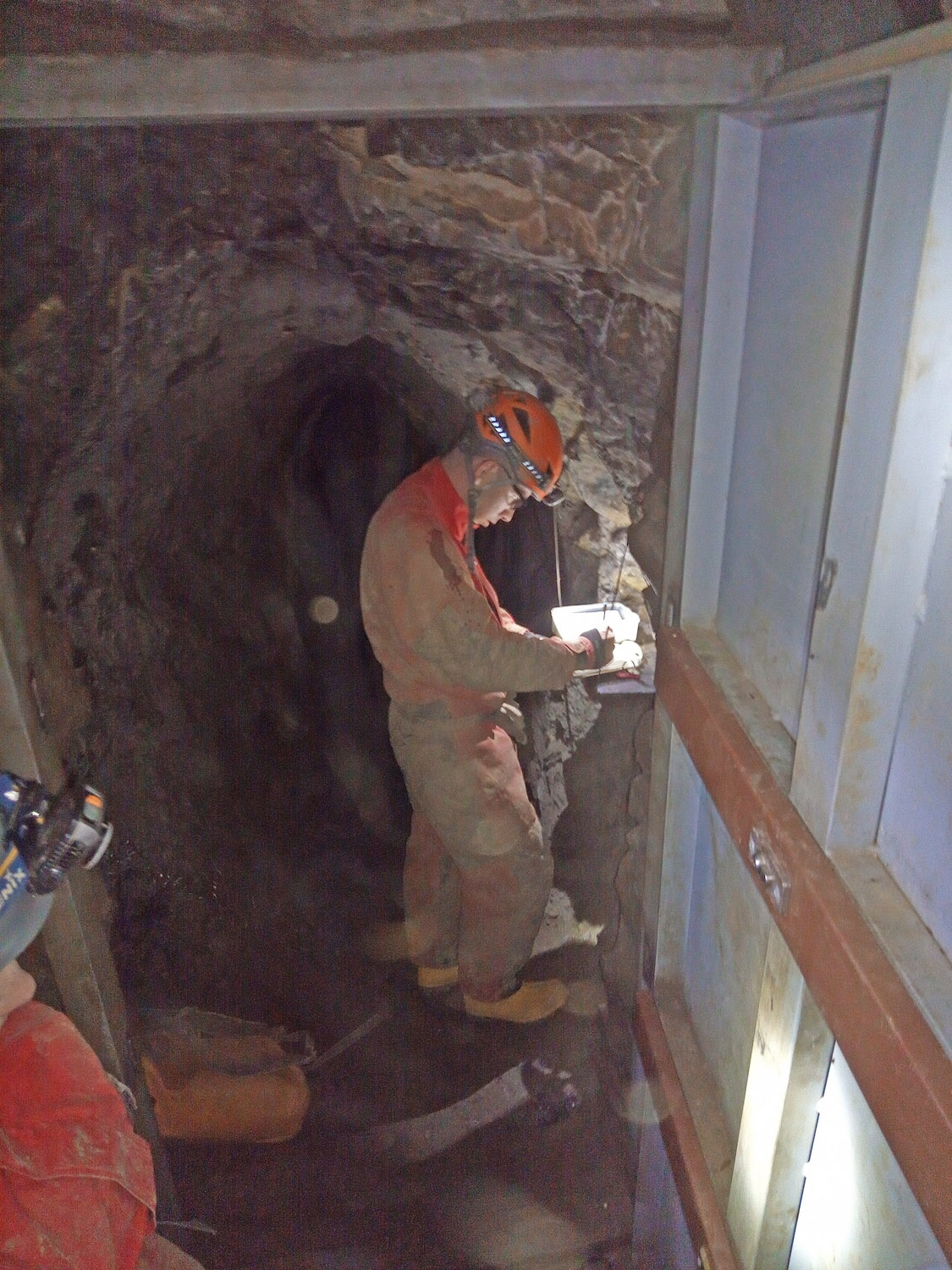 We make our way down an artificial tunnel (complete with bannisters!) until eventually we hit the natural stuff. The size of these passages is huge – 10m or more in diameter, interspersed with caverns 50m+ in diameter. 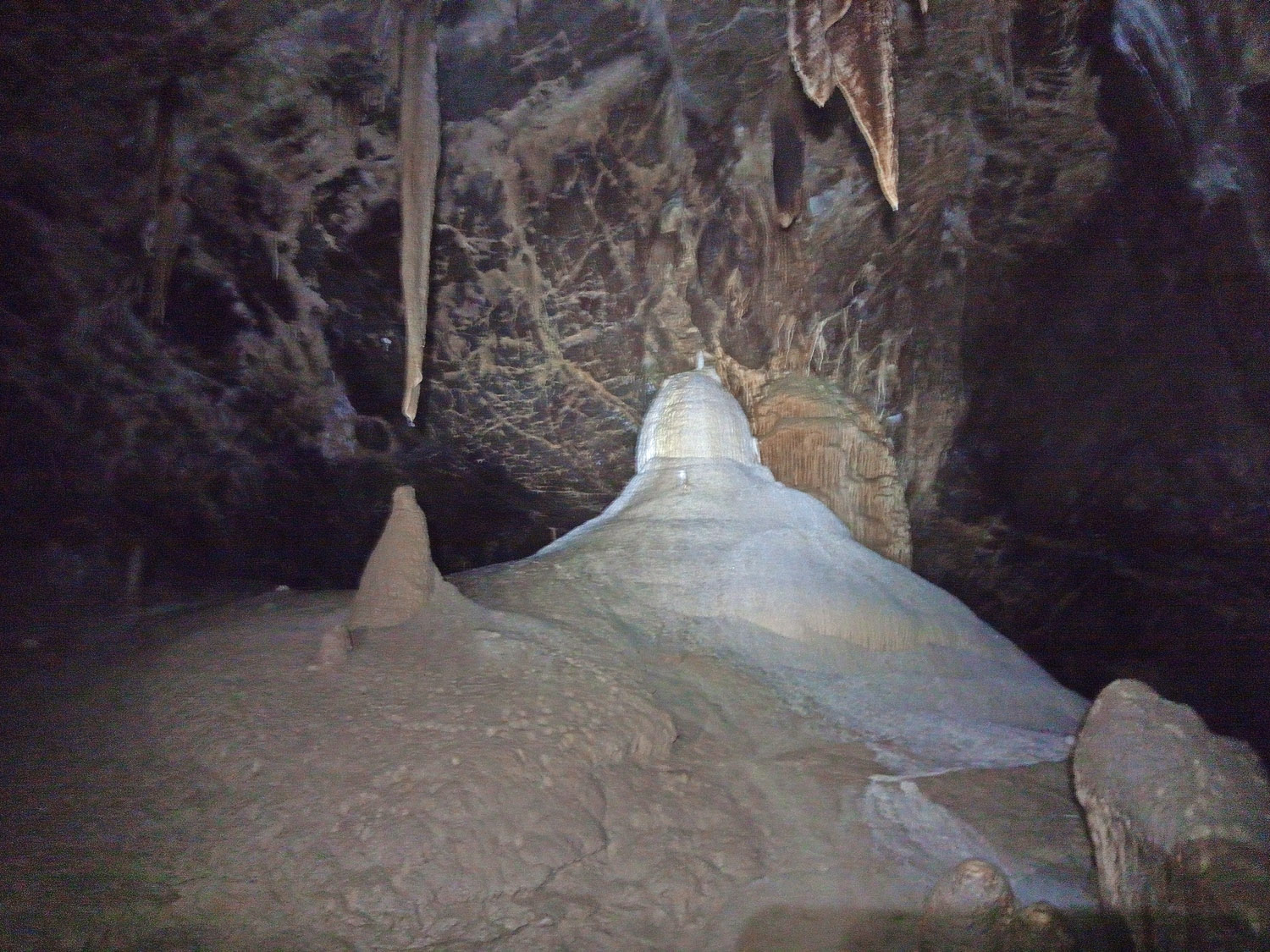 Heading along taped paths, we make our way up the vast ancient fossil route, liberally endowed with beauty 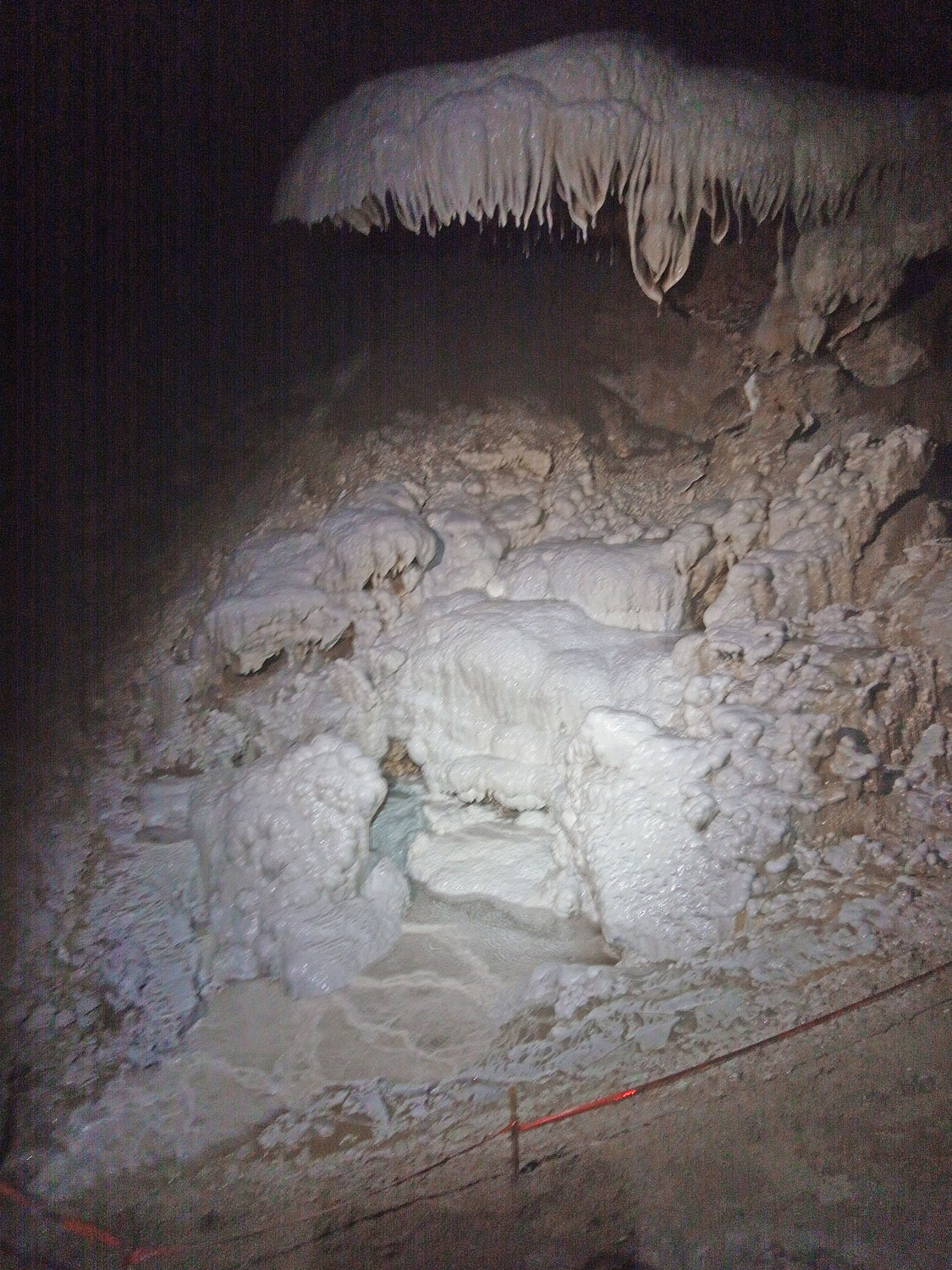 Eventually we reach a junction, where the Sloupsky Potok and Bila Voda streams meet to form the Punkva River underground. We head up the Bila Voda branch, and soon encounter a lake. A nifty little raft on a hauling loop makes light and comfortable work of crossing this. 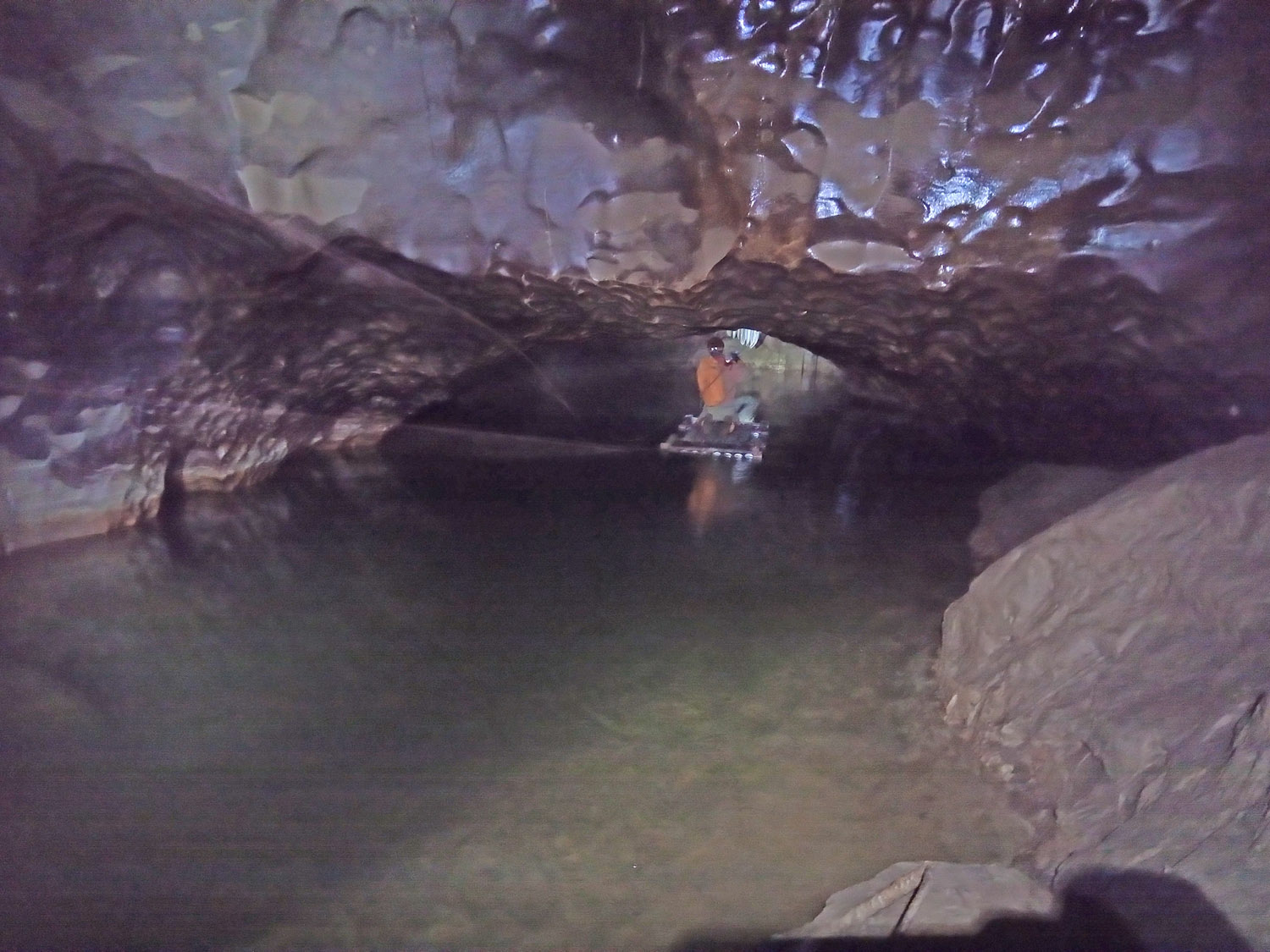 Unusual patterning appears in the walls around here – possibly fossilised coral colonies eroded into scallops by the water? 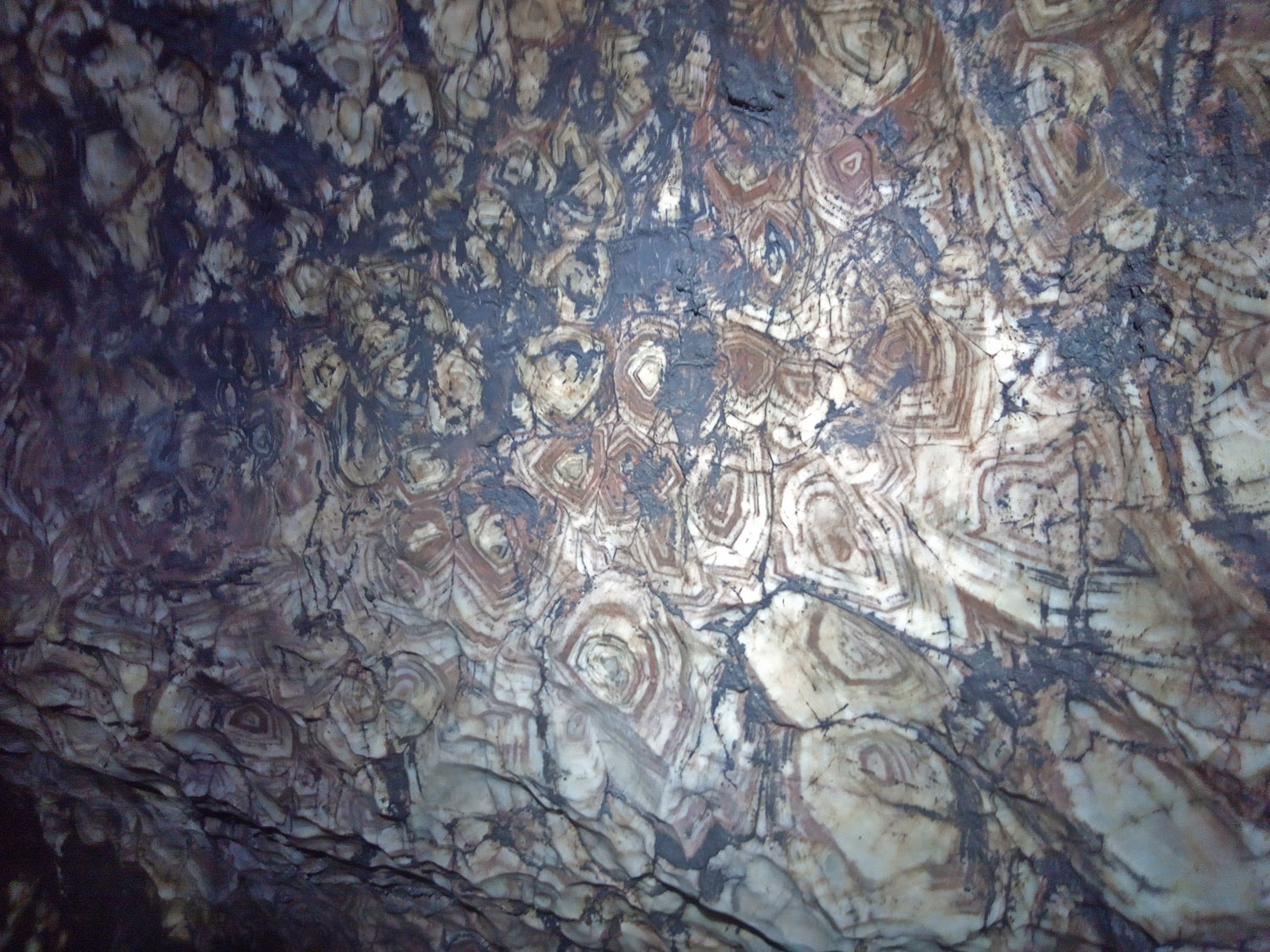 After doing some brief science (the rangers were measuring CO2 levels in various sections), we turned back and headed to Milan Slechta’s Cathedral. This stunningly decorated high-level chamber was named after one of two chaps killed by flooding in 1970. 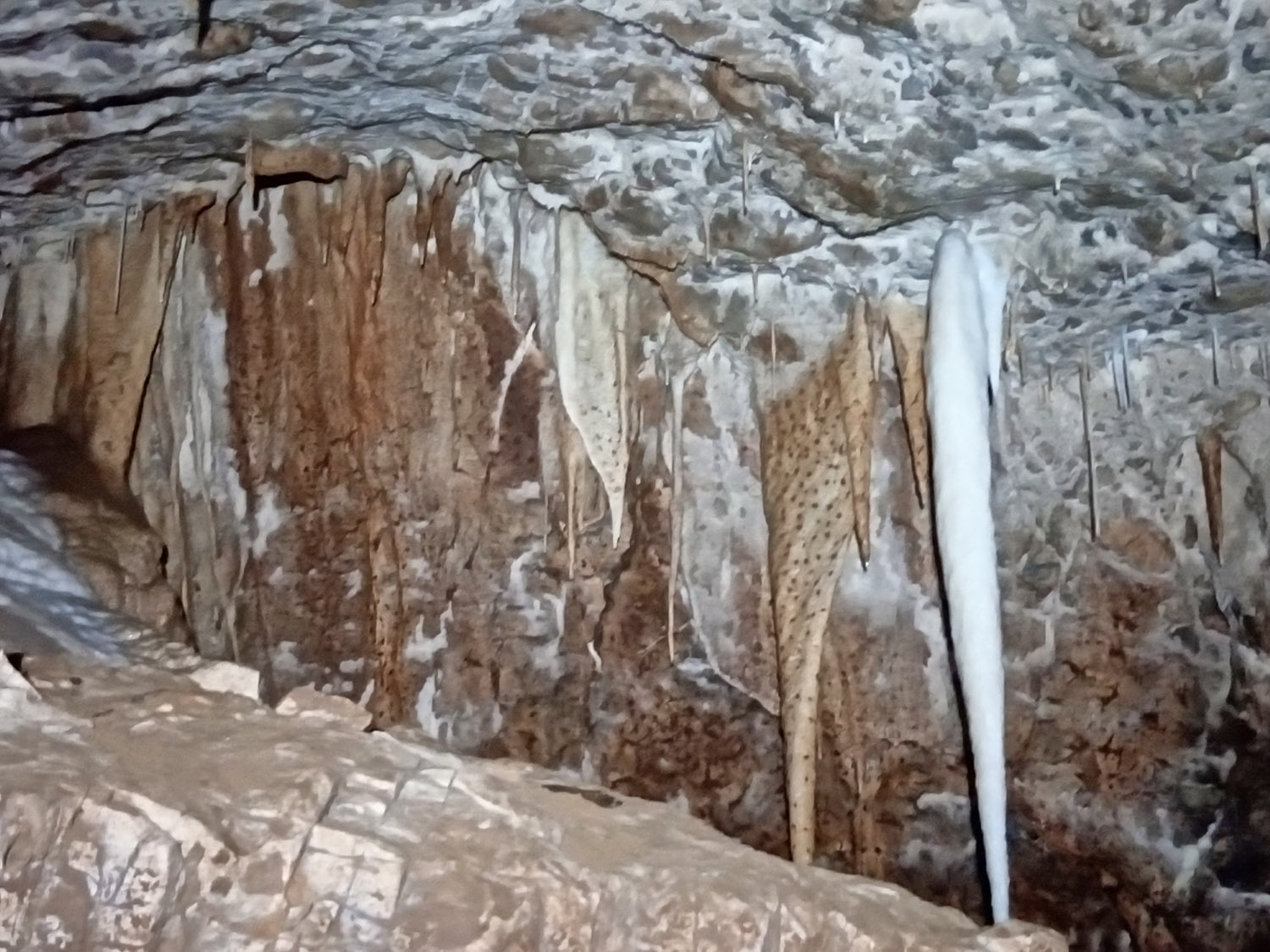 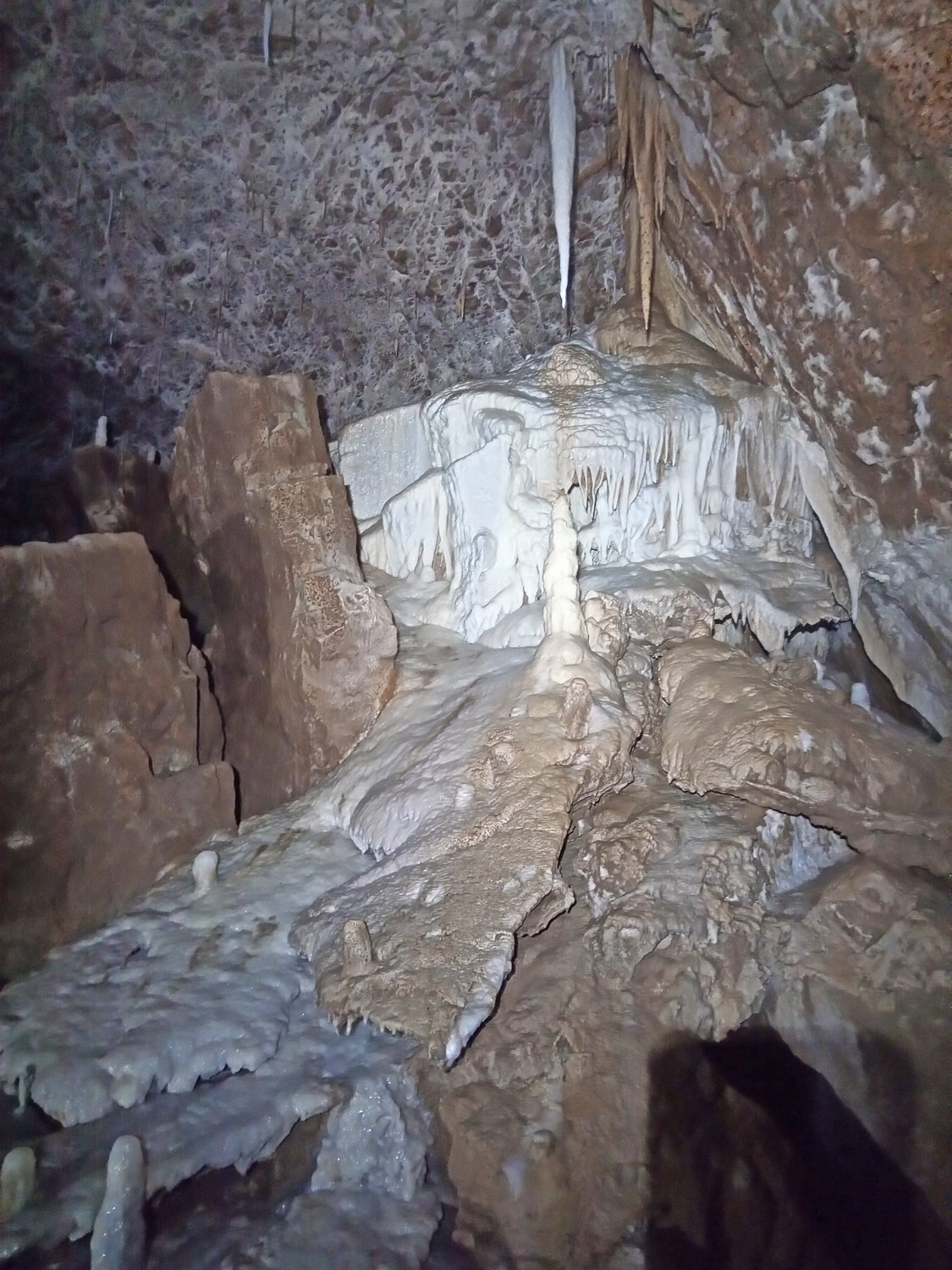 Heading back downstream, we made a detour through The Labyrinth, which lived up to its name, branching every few metres, although this was largely devoid of formations due to frequent flooding.

After another short loop via the Eastern Macocha Corridor, we took a final look at Honza’s Room, a secret grotto tucked out of the way and a real jewel in the crown of this system. 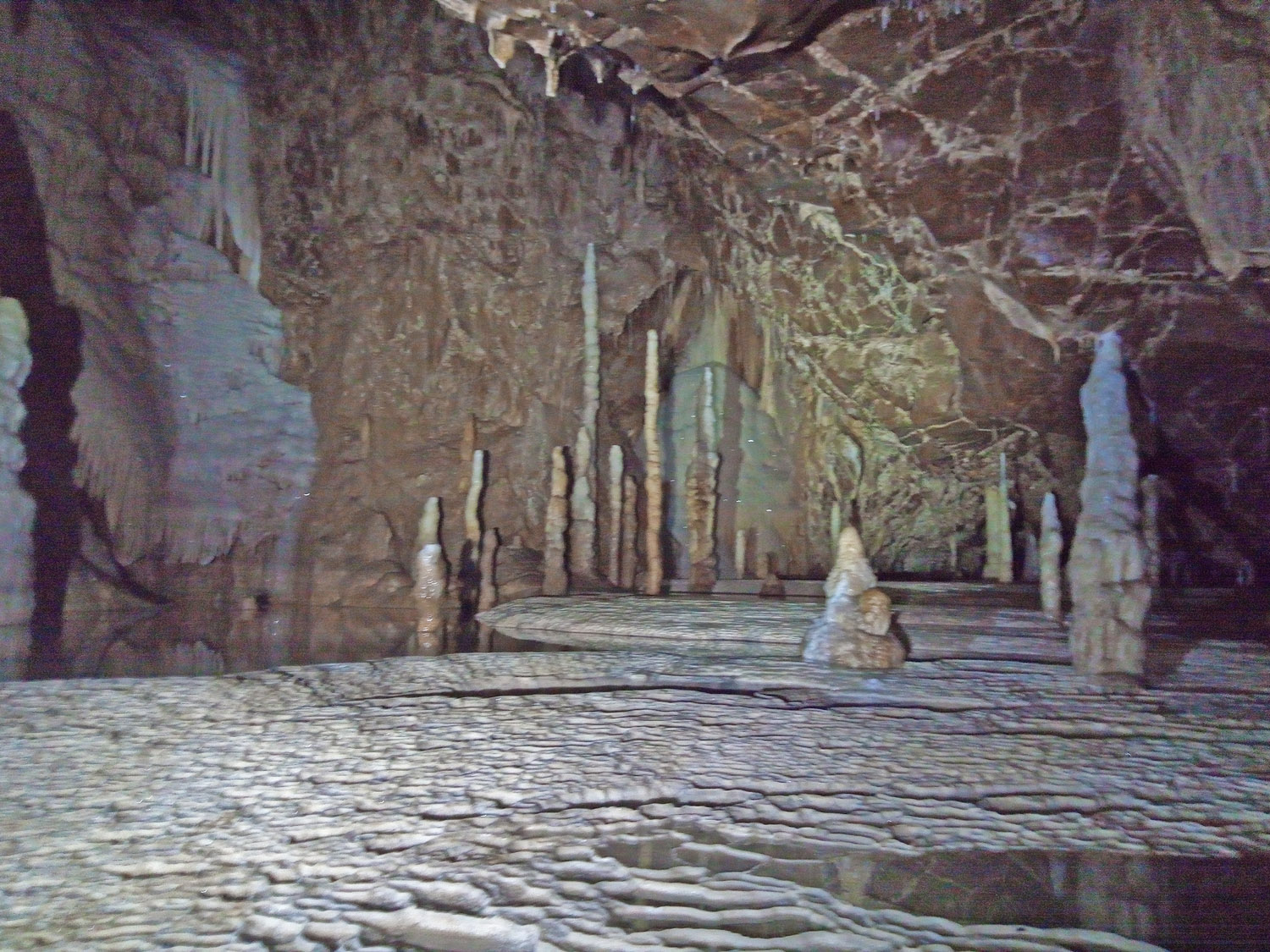 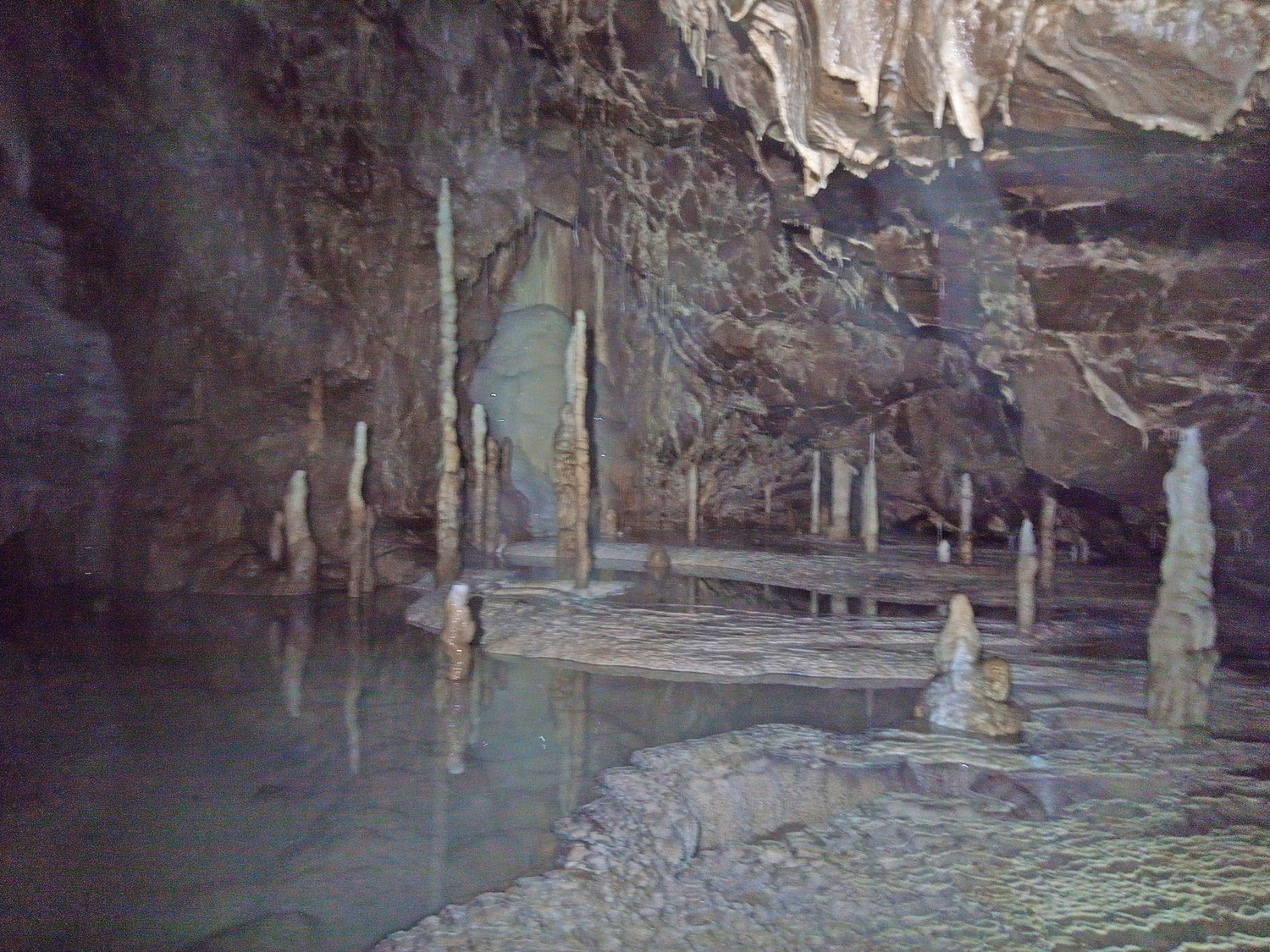 A great day was had by all, with 7 hours being spent underground. Many thanks to staff at the Moravsky Kras Protected Landscape Administration for giving me this opportunity. I shall be back for more!