Over the weekend of 11th-13th September, the Czech national caving community came together for their annual (Covid-delayed) Speleoforum get-together, and I decided to pop along to the Cultural Hall in Sloup in the heart of the Moravian Karst on the Saturday, to exchange some awkward Czenglish conversation, buy the annual magazine of discoveries and, most importantly, register for one of the Sunday trips. 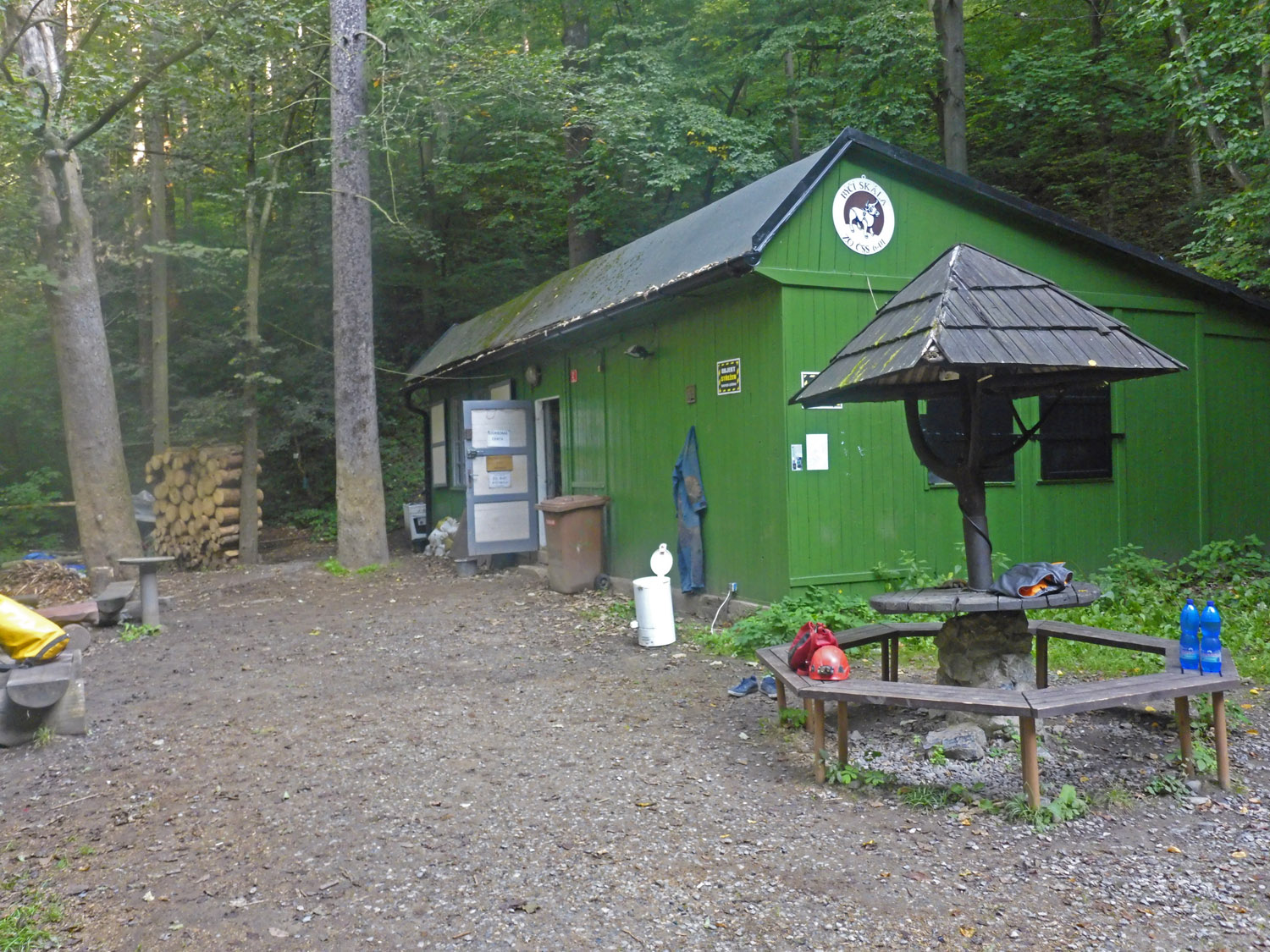 I chose Býčí Skála as most of the other trips on offer revolved around the Amatérská system I’d already visited previously, and I was keen to see another big system. I pulled up around 10 to a grand sight – set back around 100m from the road was a yawning great hole in a towering cliff, otherwise surrounded with foliage. The local club – “ZO CSS 6-11” (catchy, I know) have established a cosy little cottage a stone’s throw from the entrance. 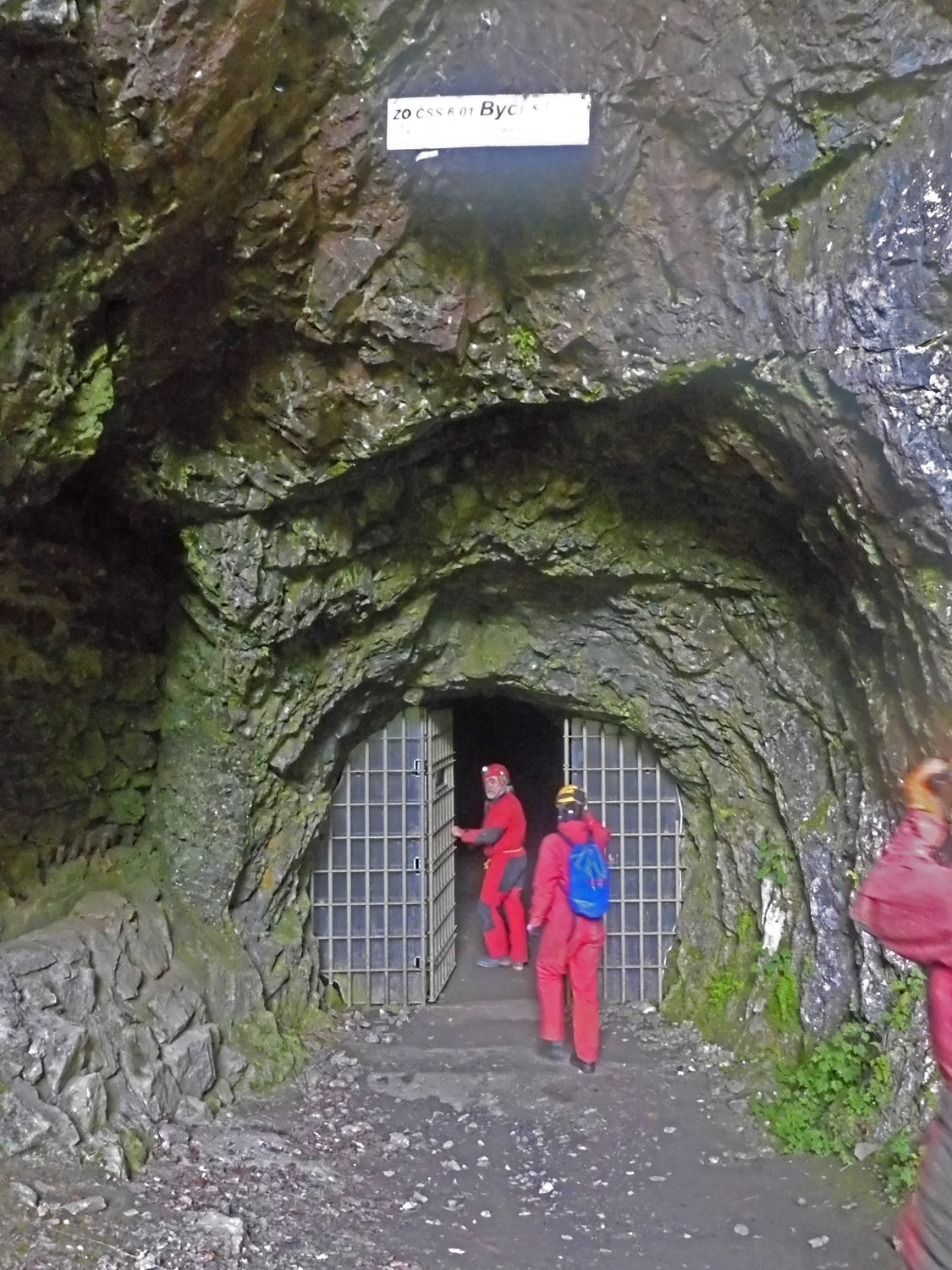 It was here I met up with the trip leader: a mad-looking but warm and friendly older lad called Franci. In his broken English (and my zero Czech) he showed me into the club hut to look at the surveys for the system. They’re currently resurveying the whole system digitally and it’s looking fantastic. As a handful of others appeared, I was introduced to two couples who’ve come from other parts of the Czech Republic, Prague and further afield. Most of them hadn’t visited Býčí Skála themselves either, so we were in for a shared treat. A couple of them, in particular a lady called Mária were extremely kind and translated everything for me along the trip – thanks Mária!

Franci led us to the entrance, unlocked the carefully barricaded gate and showed us round the entrance hall – full of odd relics including plenty of nazi machinery – during WWII they started building a factory in these vast entrance chambers. Nazi concrete floors and stacks of piping and high-pressure water pumps, along with a picnic table workshop. 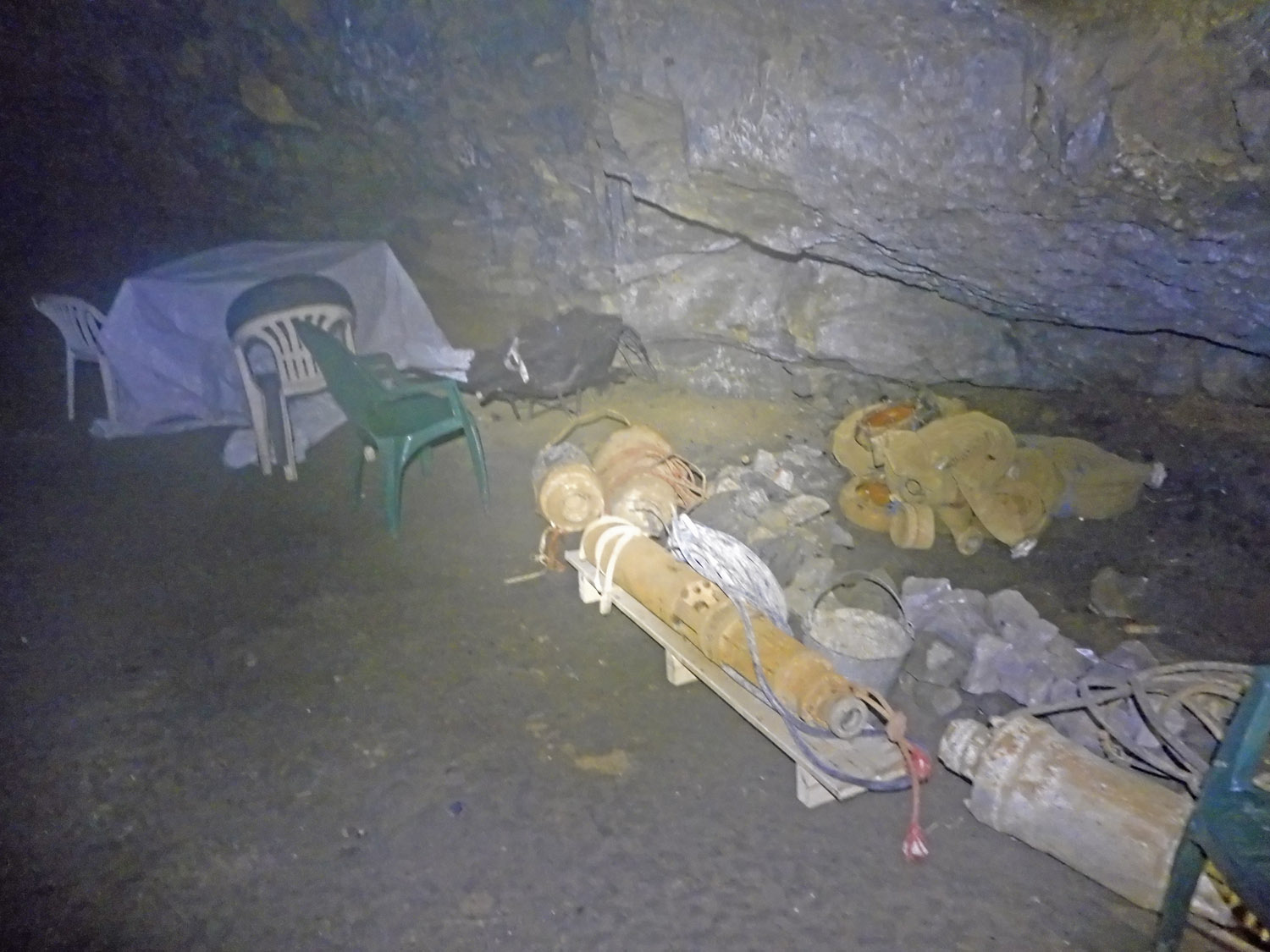 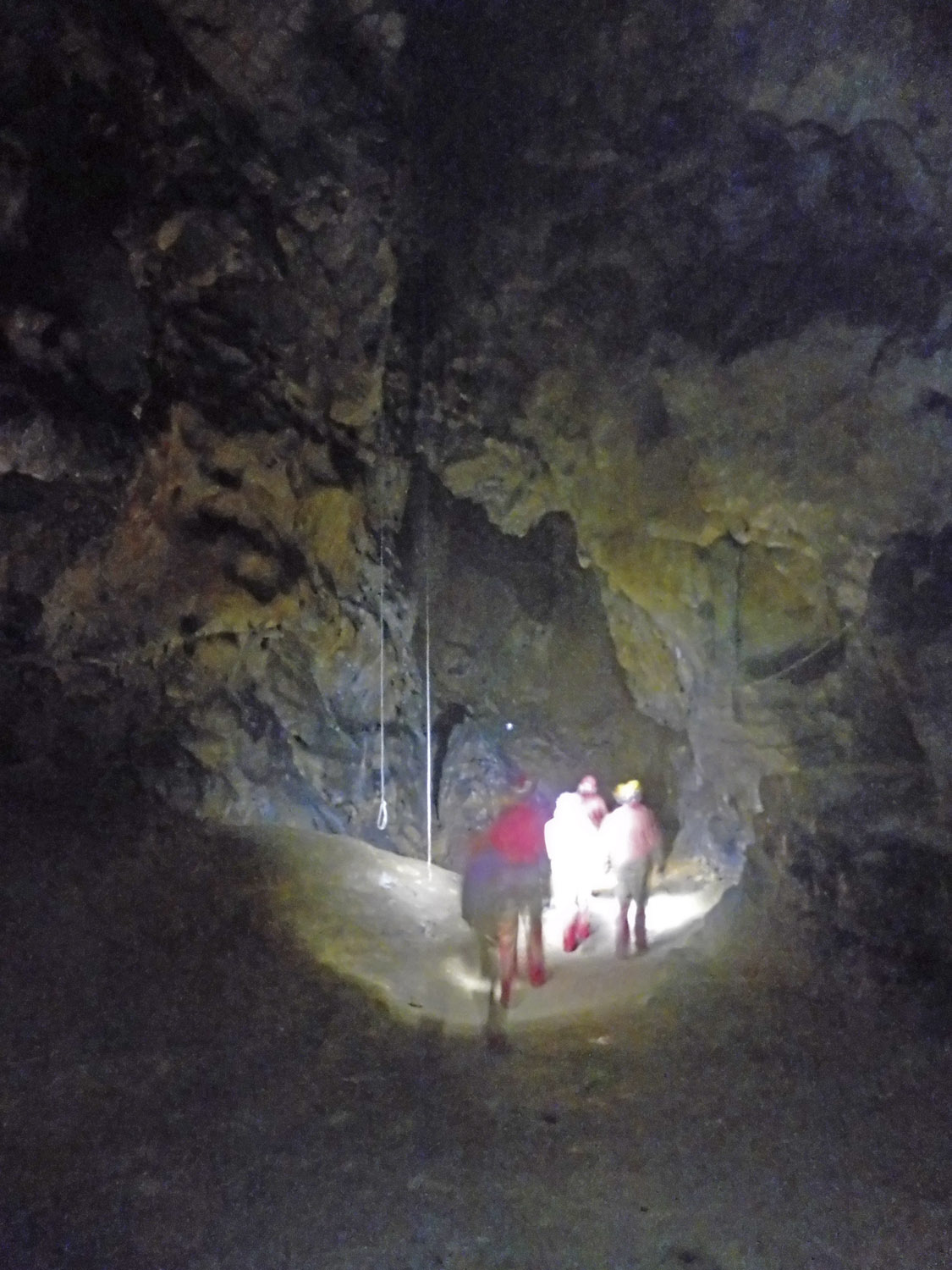 We wandered further into the hill, a train-tunnel passageway punctuated with vast avens and chambers, and eventually reached a point where the passage dipped suddenly down a few metres, to a square-section with a silty floor.

A few carvings and dedications to local kings or bishops or something, as this was previously the end of the cave – a sump blocked progress. After some pioneering diving early in the 20th Century, divers discovered the sump was fairly short, static, and was only refilled when the streamway discovered beyond overflowed. As a taste of some of the engineering to come later, and as Franci explained as we passed a boat, ‘Here was lake, but we removed it’. 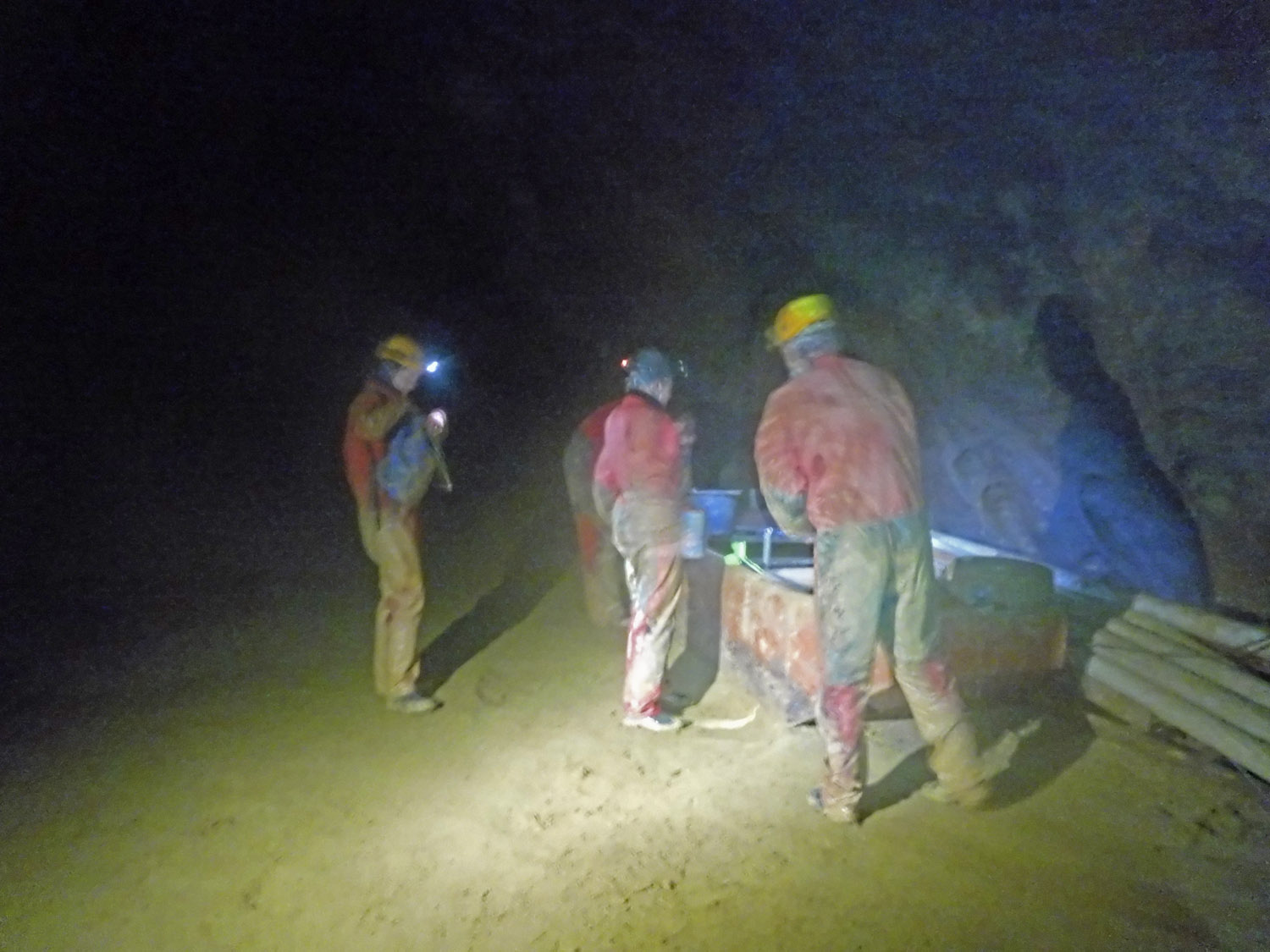 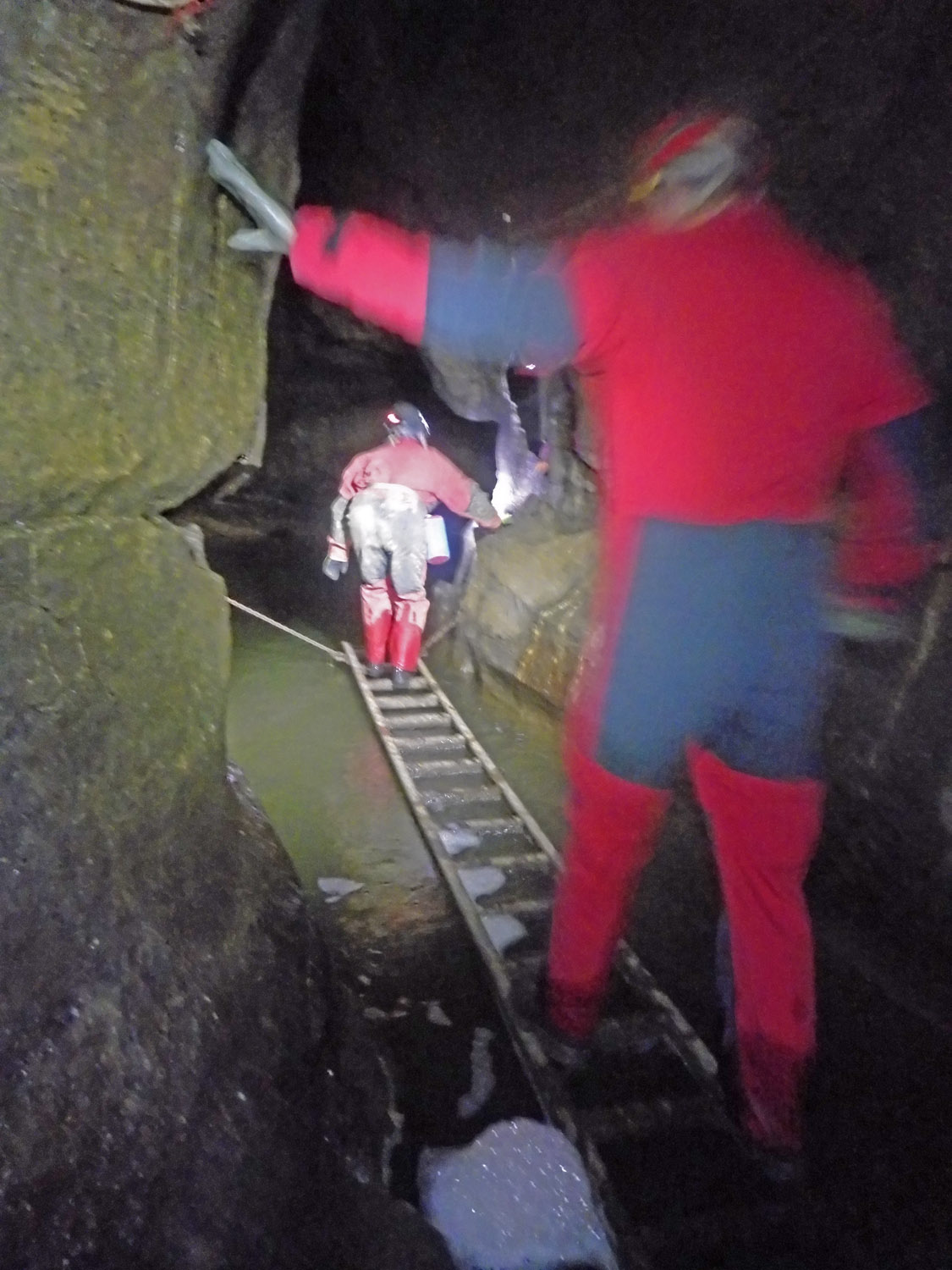 The passage rose again as the now-dry sump ended, and at this important junction, the vast main streamway hit us head-on, with the stream veering suddenly to the right downstream into a smaller canyon. We took a left into this canyon.

As seems to be the case in Czechia, it’s very important to keep your feet dry. This ladder-bridge led to a ladder leading up to the start of a via-ferrata style handline traverse.

This was quite thrilling especially when the ledge disappears and a wide step across to a stemple is needed. It’d probably be a cowstails job in the UK. The stakes are low though – a 3m fall into deep water. 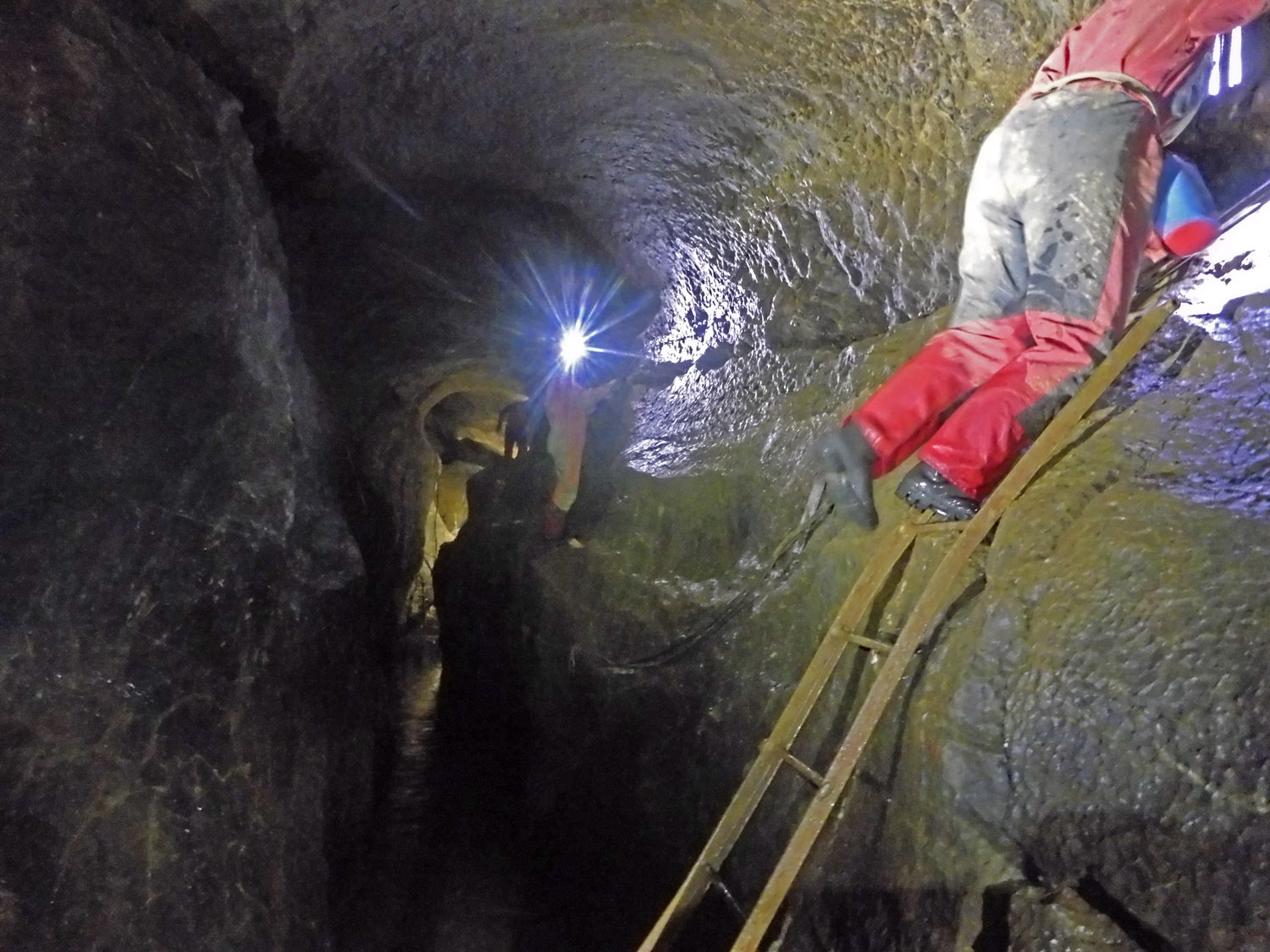 A tightrope shuffle across the stream led into an abandoned roof tunnel, and the first narrower section of the day. 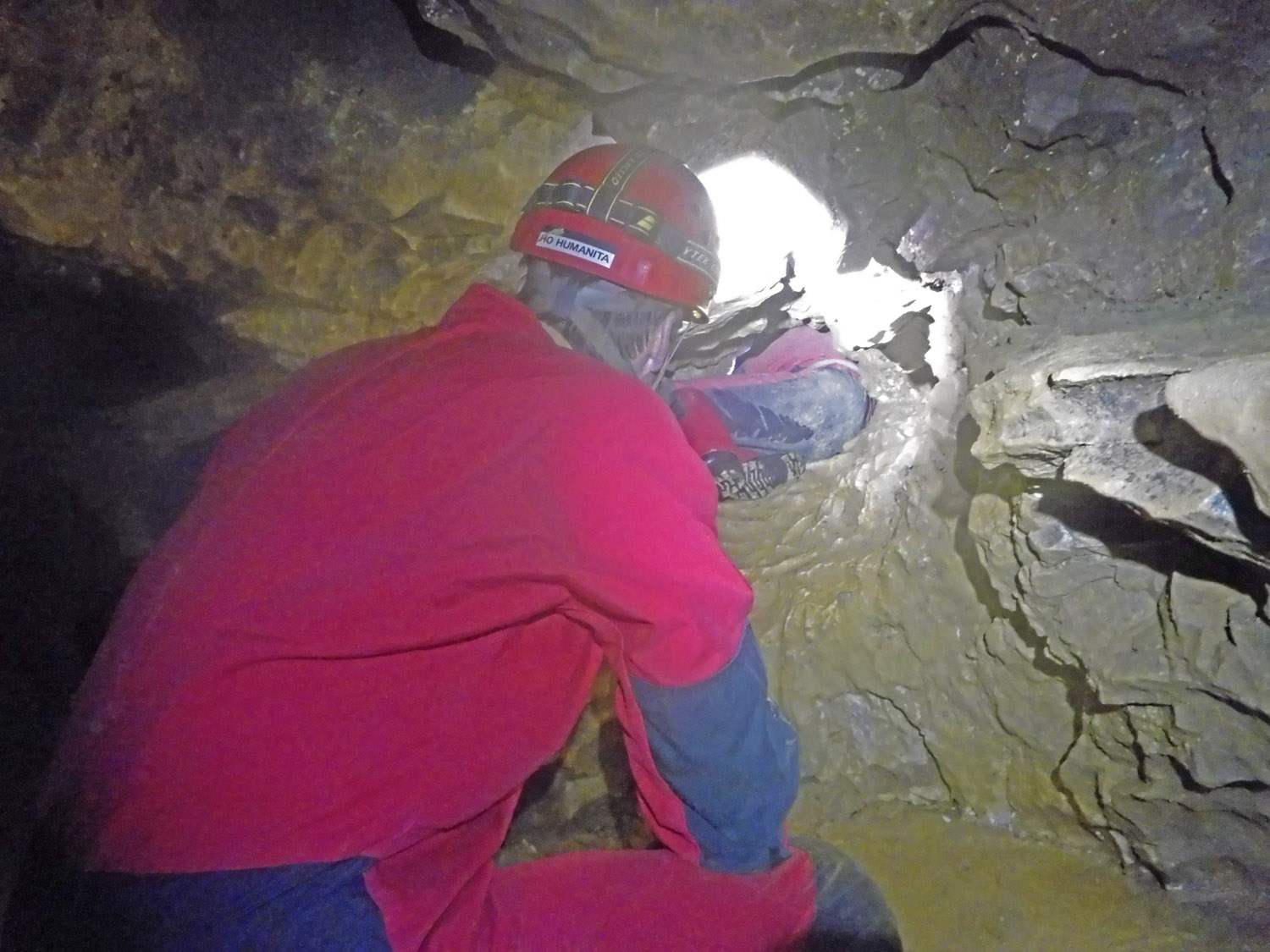 I should mention that the engineering behind the digging operation going on here is insane. I reckon a commercial mine floorman would be impressed wandering around the maze of passages around here, admiring the pipes running along every passage – one for pumping fresh water down for the high-pressure blasting pumps, and another for pumping out the waste water. Accompanied by what can only be described as a city-scale power grid. 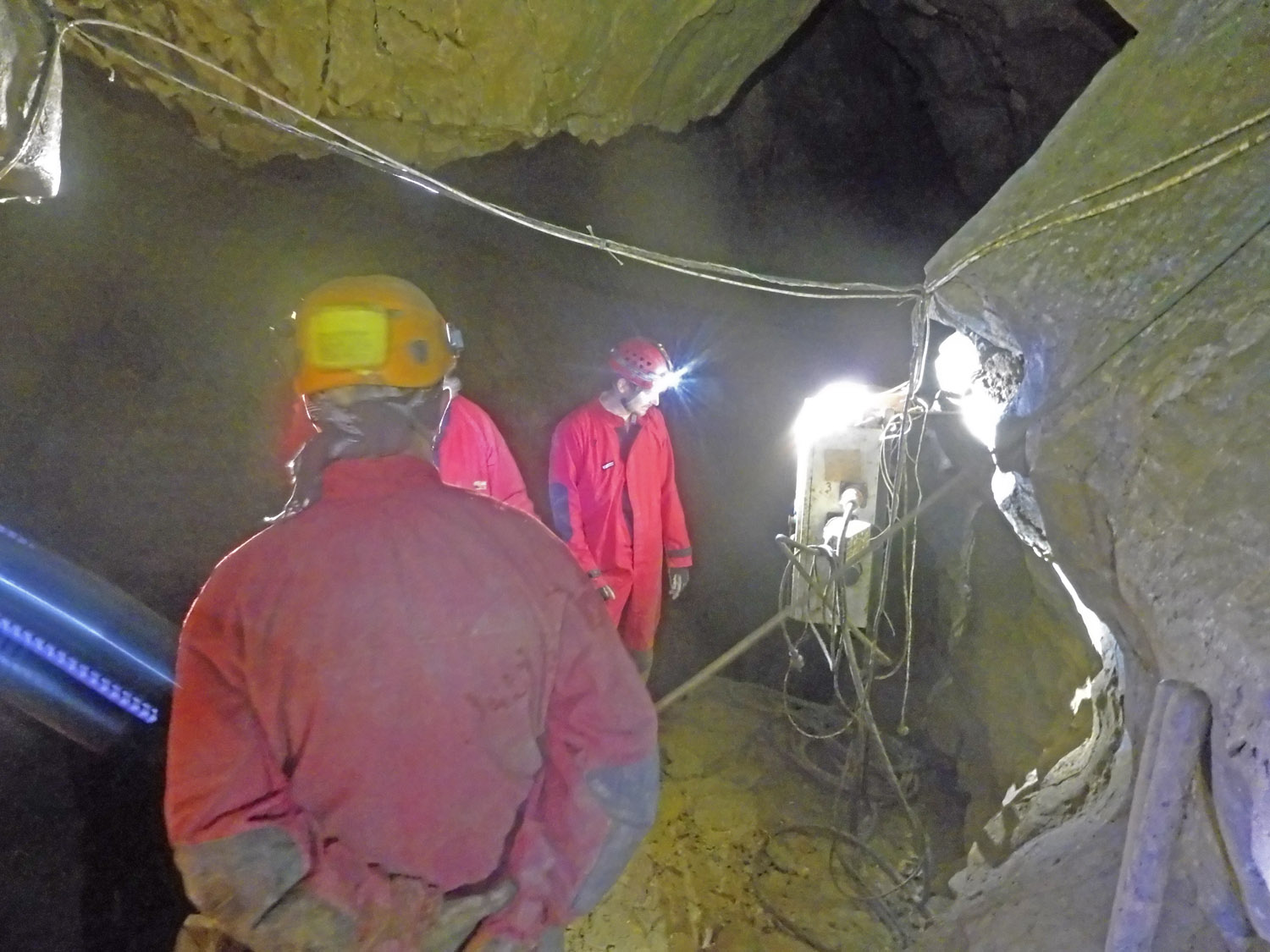 Franci leads us eagerly around his labyrinth of muddy passageways – many of them not more than a couple of years since discovered. He gestures enthusiastically at the club’s various ‘projects’ at the end of side tunnels. They’re making crazy progress with their high-pressure water blasting technique to strip the fill from ancient tunnels. 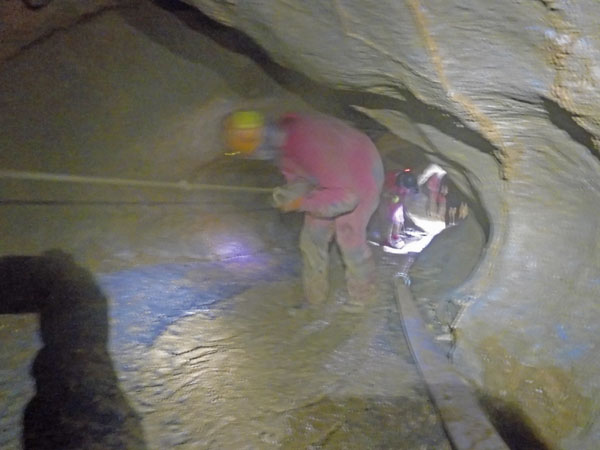 We weave around ancient phreatic tubes for around 90 minutes, mostly comfortable walking and scrambling, and a tube rising at a 45 degree angle for about 20 metres. A handline here was very welcome but the polished rock and mud still made it a bit like something from Fun House.

Eventually we reach one of their most promising digs – the stooping-height passage ends at a 15 metre shaft. 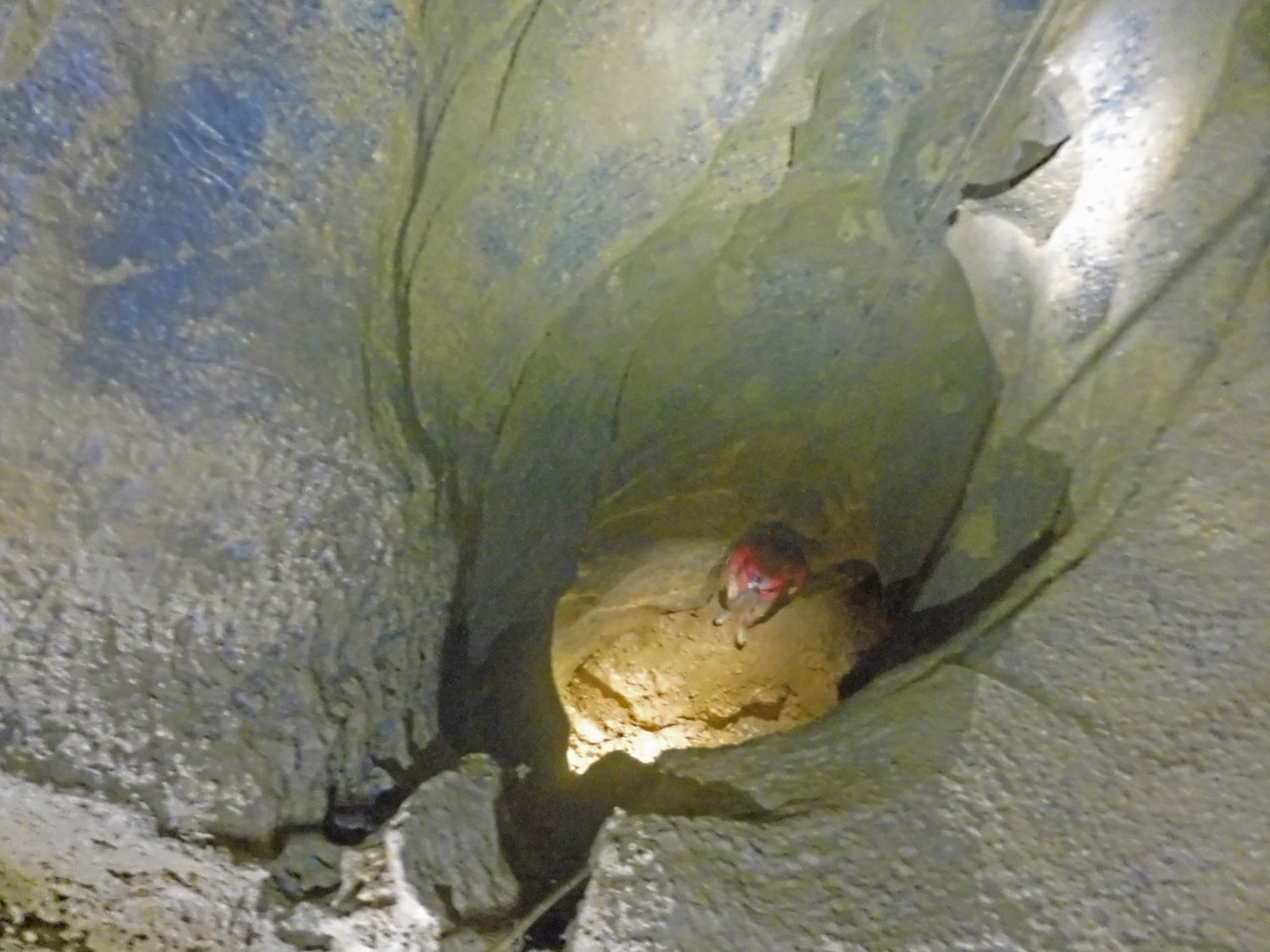 A slightly precarious haul over the side wall pops you at the top of a narrower parallel shaft. This has been fitted with rebar staples to form a convenient route down alongside the pipes and cables. 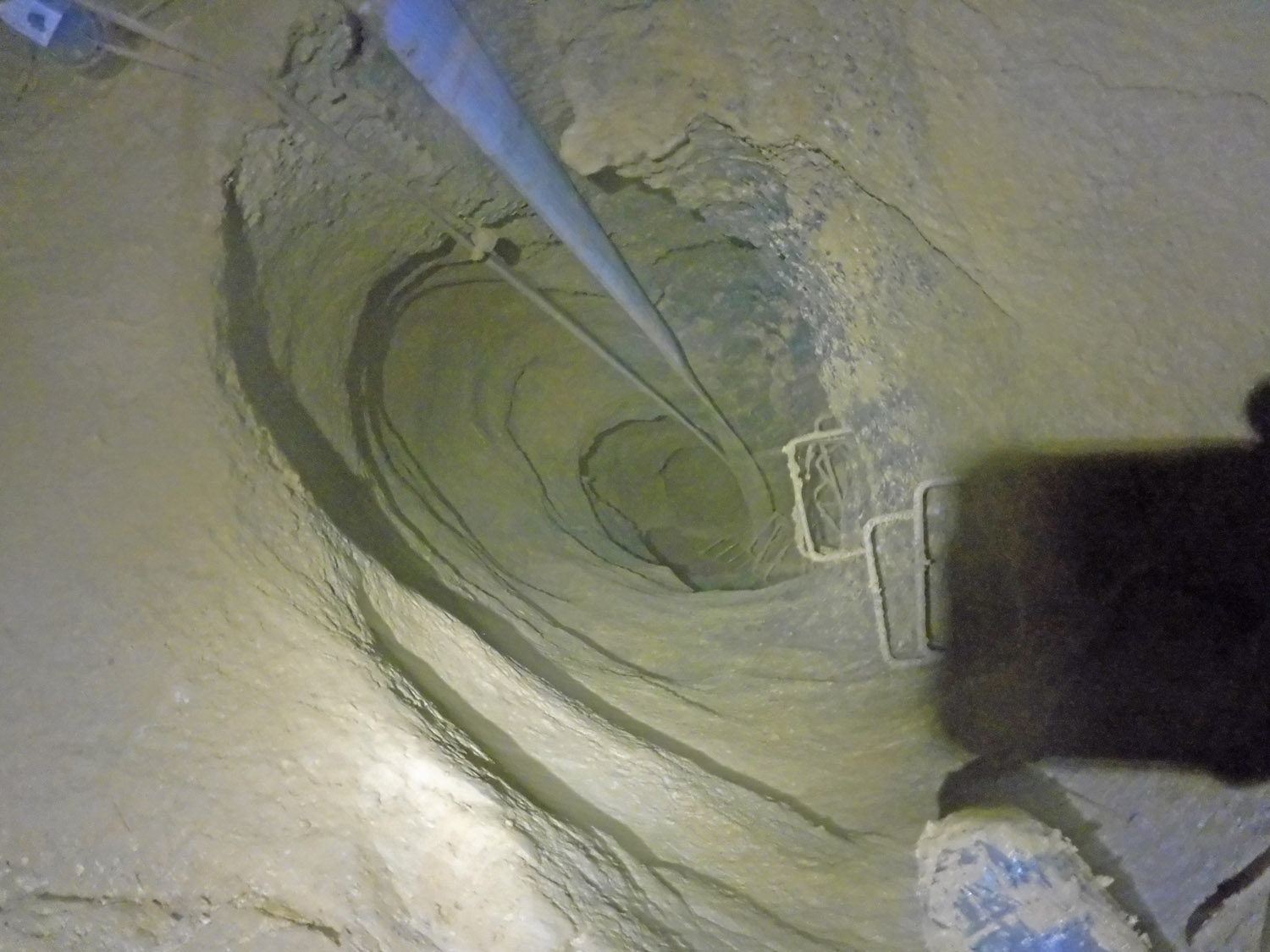 At the bottom Franci explained how down the low grotty mud slope leading from the bottom of the shaft was the current dig head, and they were just 4 metres from breaking through to a passageway just inside the huge entrance hall, which would create a nice long round-trip in the system.

Back up we went and reversed our route for a bit, making a small diversion to another dig end full of disgustingly deep mud. We turned off into a low passage under the left wall into around 150 metres of first worm-mode, then centipede-mode progress through awkwardly placed puddles. 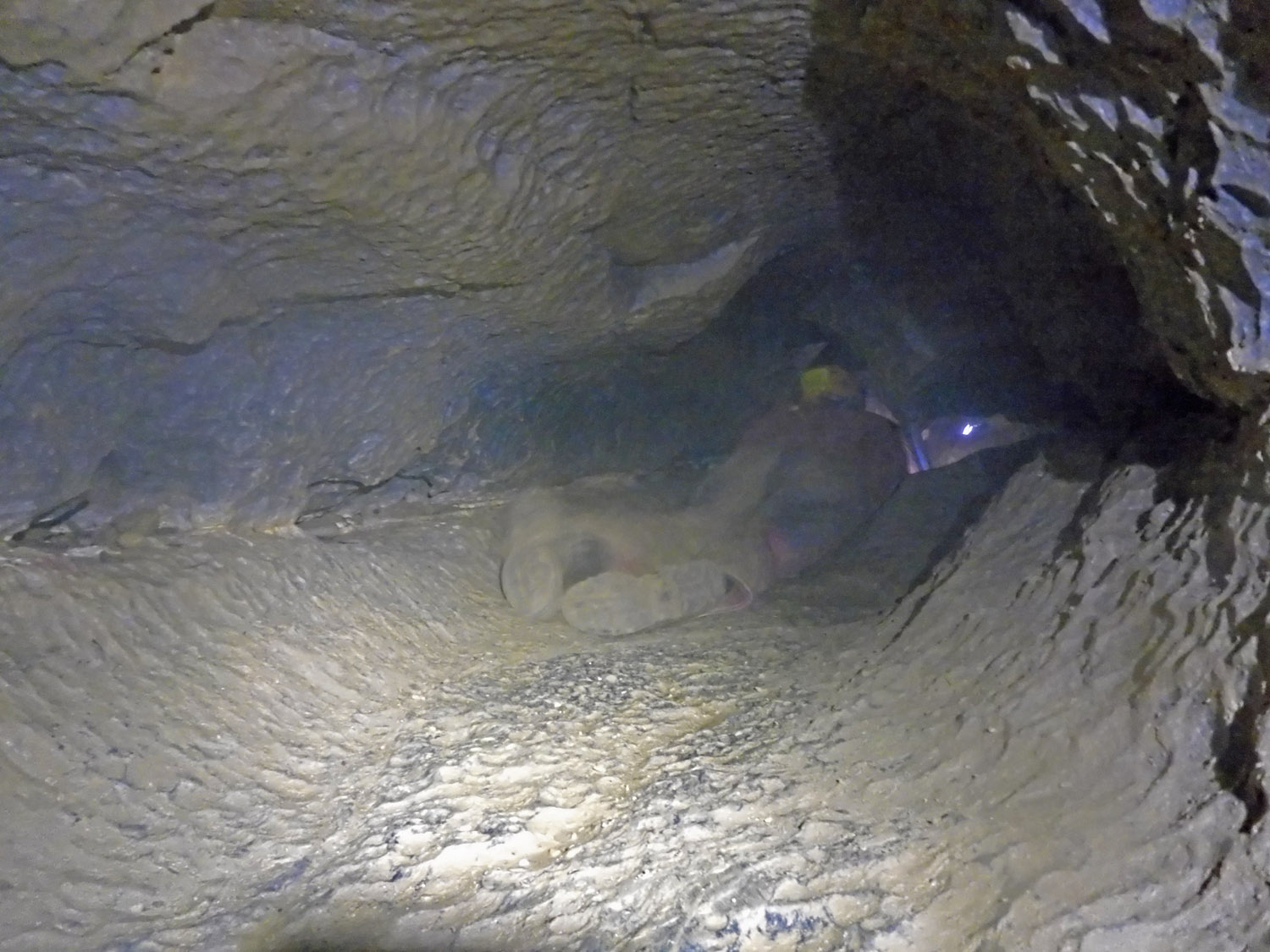 This popped out suddenly next to the abandoned boat in the drained sump. A quick and efficient cereal bar stop was had then we headed back up to the streamway, this time heading upstream from here. This was largely train-tunnel sized passageway again, with the odd huge chamber, the largest of which has a tidy little bridge over the reasonably-sized underground river flowing from Rudické propadání, the other end of this system. 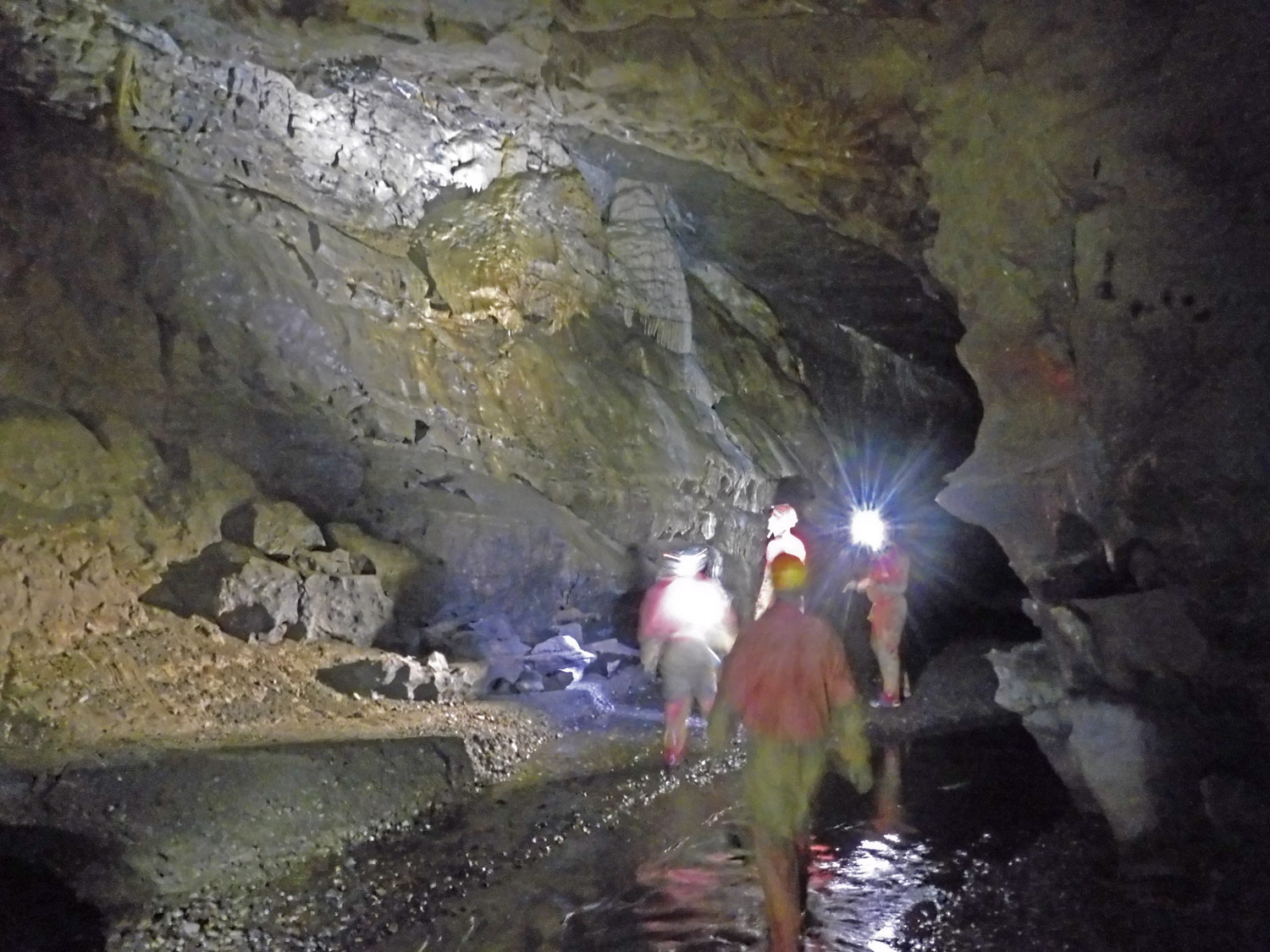 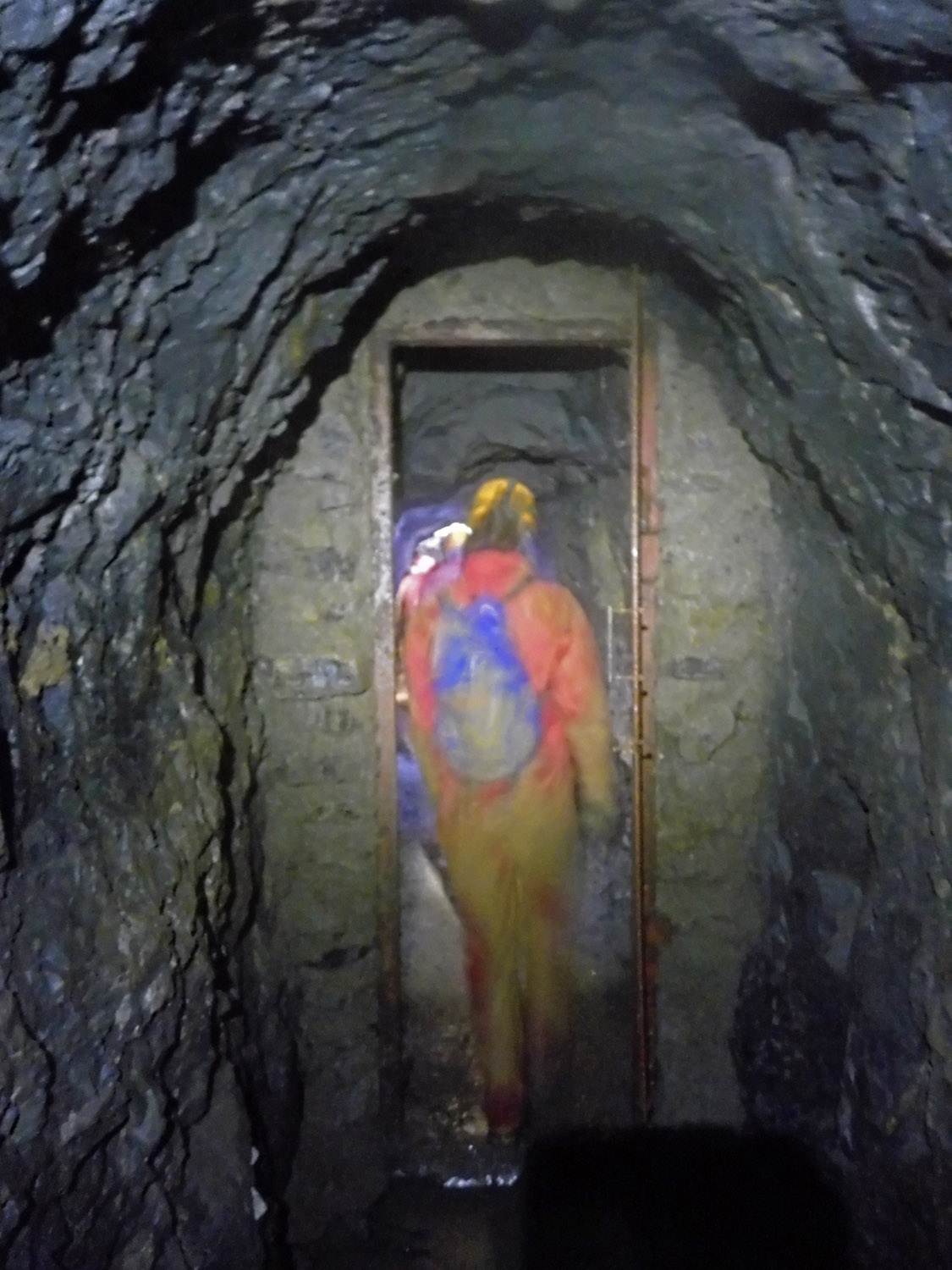 Eventually another sump is met – bypassed by a štola (adit) dug by the Czechs in the 60s to keep their feet dry. This pops out into the roof into the large sump hall, with a pretty patch of straws and stals – some of the very few in this system.

A mud traverse then a ladder gets you back down to the streamway, which after another short section of grand size again lowers to a sump. And once again, the Czechs have engineered a second štola to bypass this too. 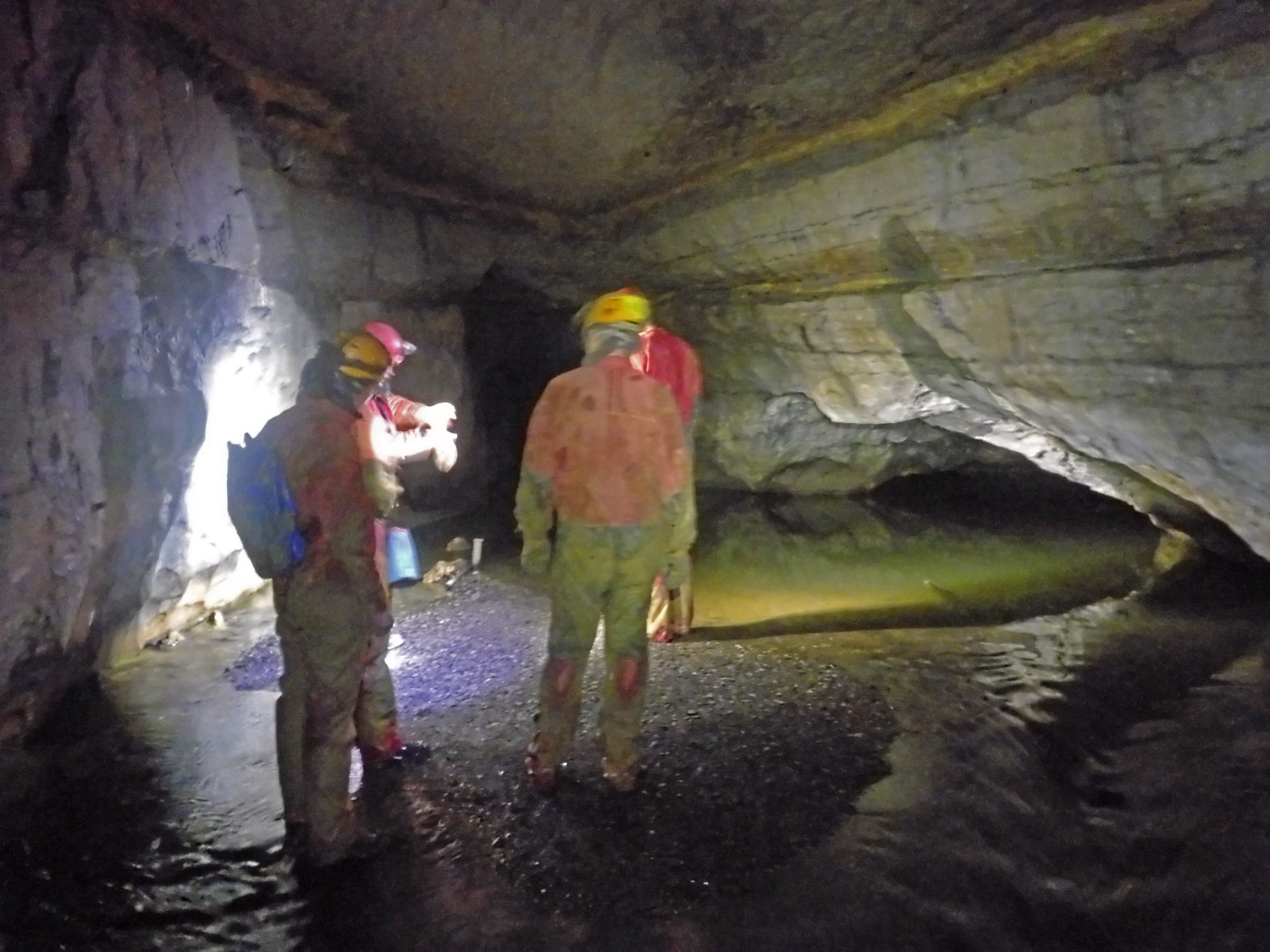 More huge streamway leads us to a ‘polo-sifon’ – basically a very long duck where you have to turn your head sideways to keep your head above water. A couple of the team weren’t quite feeling up to it so we called it a day and headed back downstream. There are kilometres more to see further upstream, eventually ending at the Serbian Sump, a dive through which surfaces in the bottom sump of Rudické propadání, the main feeder to the system.

On the way back we were shown graffiti that had accumulated over the centuries, including apparently the guy who invented the pencil who used this wall to test durability shortly after he invented it. Which I don’t believe for a second, everybody knows the pencil was invented at the Keswick pencil museum … 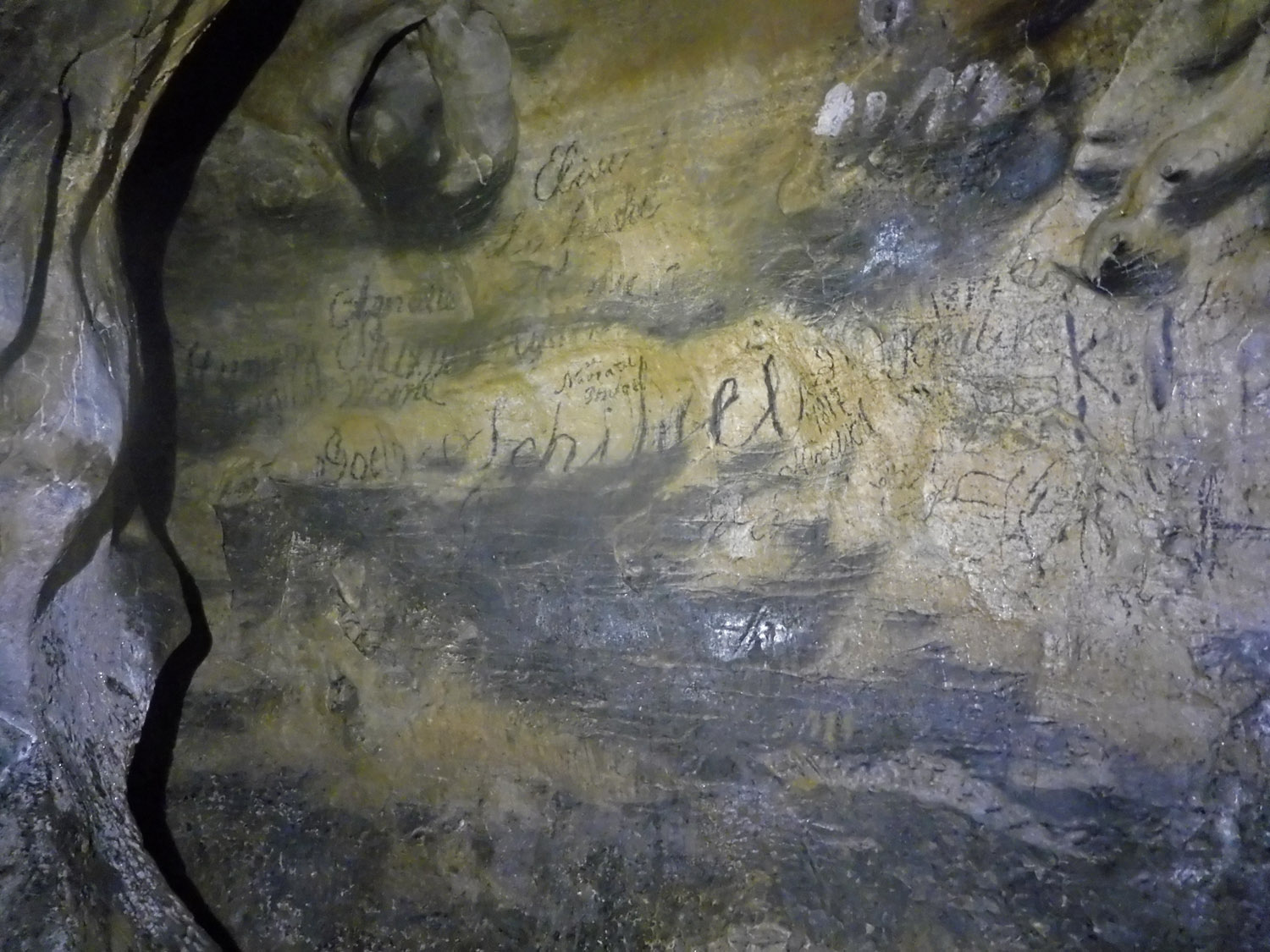