Skirwith Cave is an ex-showcave above Ingleton 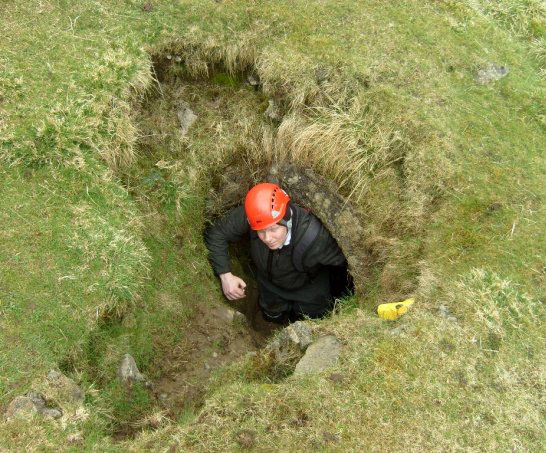 It was explored between 1934 and 1947, and opened to the public as far as the waterfall chamber between 1964 and 1974. Business wasn’t good however, with White Scar Cave a stone’s throw away offering a much more exciting and well-decorated visit. Roof collapses finished it off and the show cave was abandoned. It’s now in theory open for all to visit, although please follow the access guidance on the CNCC Skirwith page. Ideally you should join a local caving club to properly experience this and other caves in safety, but should you choose to explore Skirwith be aware that it’s an active stream cave, and can become very dangerous in flood conditions. The lower sections above the waterfall in particular could flood to the roof.

The entrance is located near a small scar of rock with a stream emerging, above the Chapel-le-Dale road. Parking (not obstructing the gates) can be had at a small layby. A short walk up the field from here brings you to a rock scar with the remains of concrete and some steps. Head up the steps and straight up the hillside for about 20 metres. It can be hard to find but you’re looking for a small concrete arch with a collapsed roof. 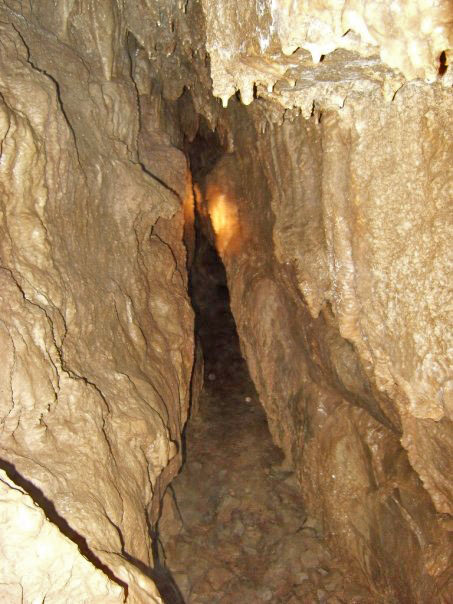 Headlamps on and head down a rocky slope, past the remains of the original locked gate and into a comfortable-sized passageway. After a short distance this meets the main streamway. Stomping up here gets you to a point where the original staircase route from the showcave days has been completely blocked by roof collapse. A narrow route through boulders on the left bypasses this collapse.

Looking back down the eerie twisted remains of the staircase. The regular collapses in Skirwith are thought to be caused by explosive use in the nearby quarry. 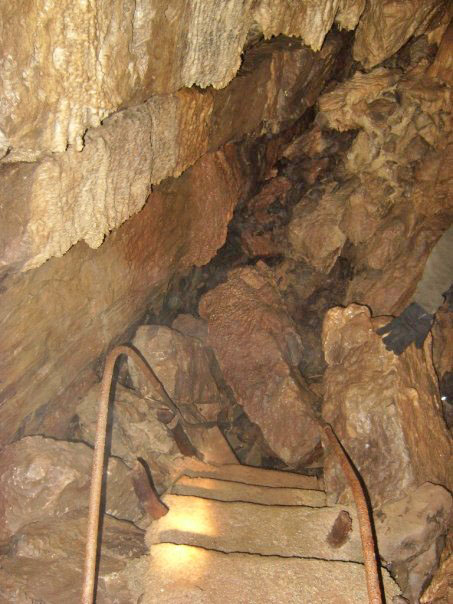 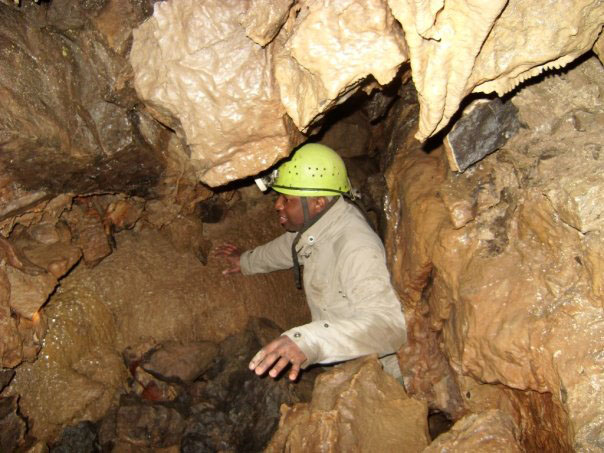 Continuing into the mountain, we arrive in a block-fall chamber with some nice flowstone and gours on the left. 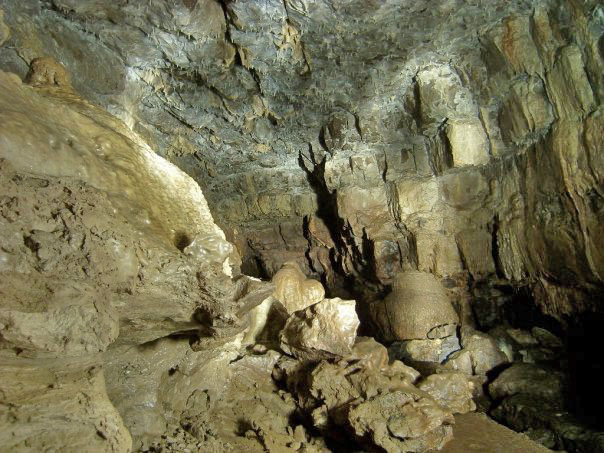 The passage descends and lowers as another part of its show-cave past shows – the stream directed by concrete blocks to create a dry path through this lower section. 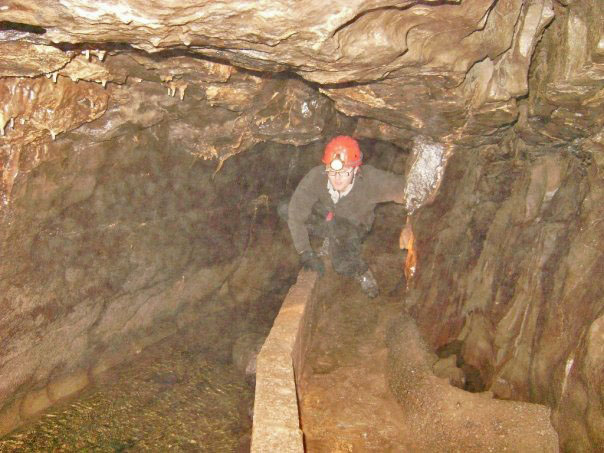 Further upstream, we reach a long shin/knee-deep pool, leading to a picturesque chamber at the end with a waterfall cascading in on the left. 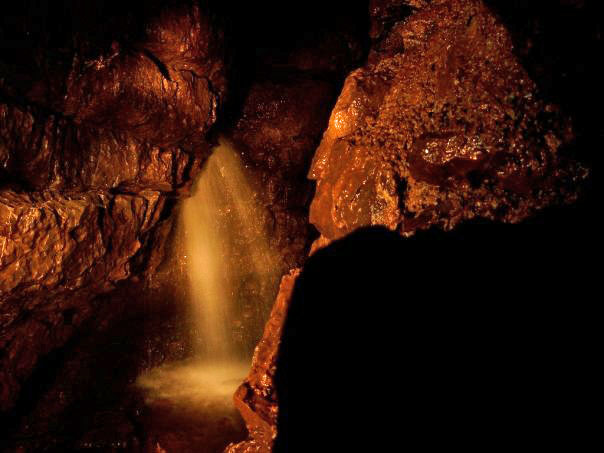 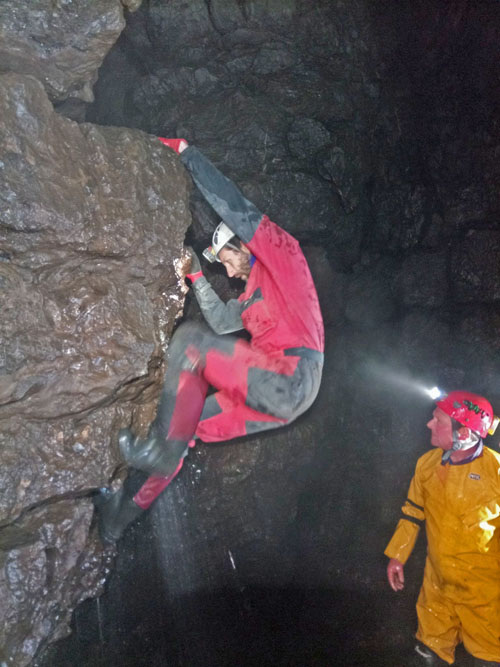 This point will probably be far enough for the casual adventurous jerry, and it’s a nice varied trip so there’s no shame whatsoever in turning back here and enjoying it all in reverse. Beyond here requires a climb up the waterfall, so you’ll need to be comfortable with a 2-3 metre scramble (and getting back down afterwards).

Following the stream up from here is initially 20 minutes of chilly grovelling in the stream, with a few long, wide, low pools. The opportunities to flex your back are few and far between. 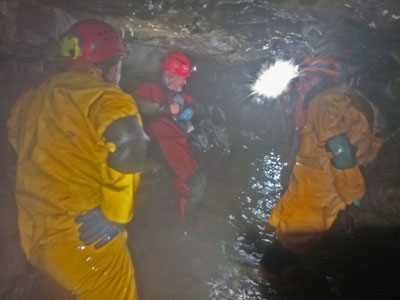 However, the effort and gloom of this section is worth it, as the roof rises into a long stretch of high streamway. It’s easy going along here, and the flowstone is much richer than in the entrance areas. 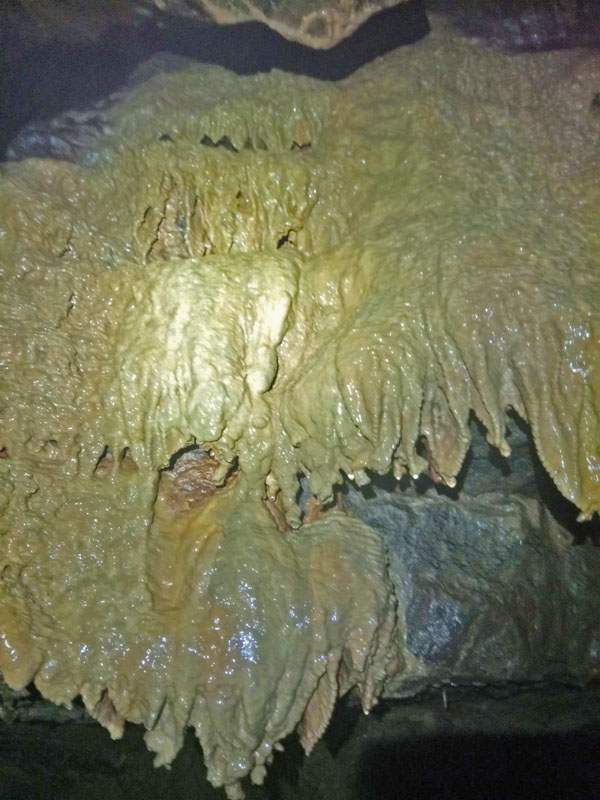 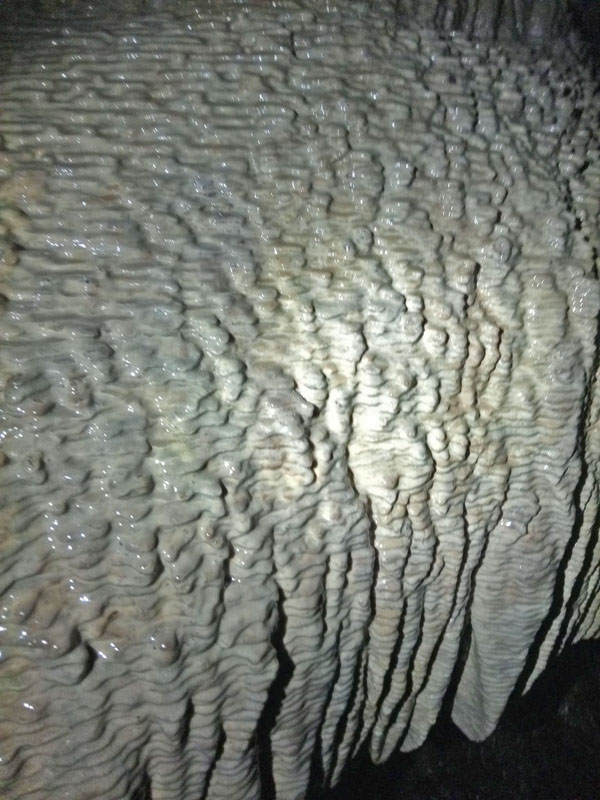 This eventually comes to an end with a lowering roof and deepening water. Hardier folk may want to continue pushing further here, but it’s not my cup of tea. There’s nothing to gain up here other than increasing discomfort.

So back downstream we head, taking care on the waterfall down-climb (the bottom of the waterfall is overhanging) and back through the old show-cave, which feels like a walk in the park after the aquatic misery of the passage above the waterfall.

Could it be time for a Steak & Ale Pie at the Mason’s in Ingleton..?