Nestled in the side-valley of Tilberthwaite Gill near Coniston in the Lakes District are extensive mines and quarry workings, extending from

Plenty of donation parking is available at the bottom of the gill and one of the many mine tip piles. A steep path heads up the gill from here passing plenty of open quarries and workings, but today we’re heading to the Horse Level, just round the corner. 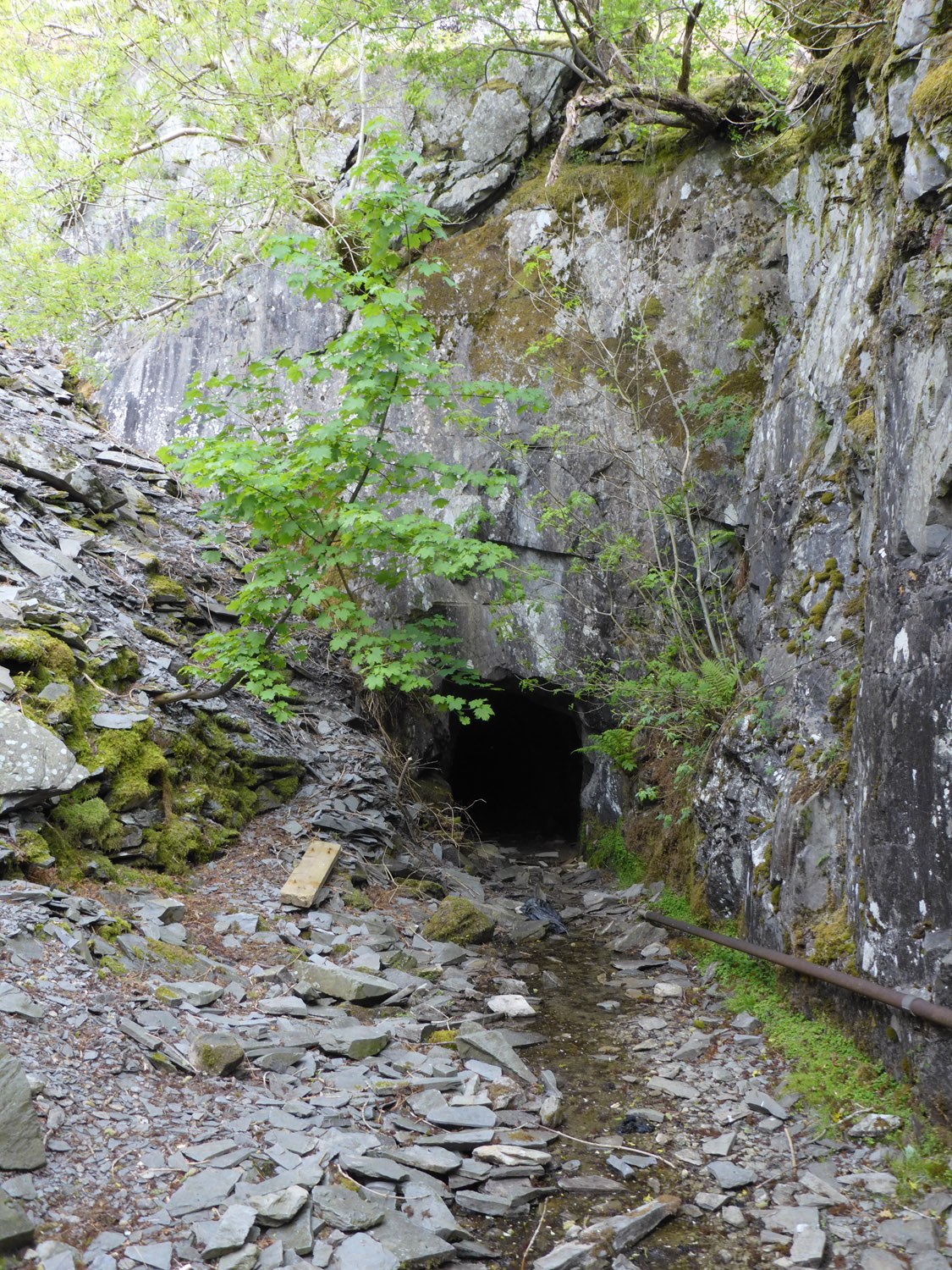 Levels are mines driven horizontally into the hillside, as opposed to entering from above down a shaft. Usually equipped with rails, they allowed ore to be removed easily by horse-drawn carts, as well as providing drainage to allow deeper mining.

If we head back down the road we came up for about 50 metres (over a small hill and round a corner) and up a rough track branching off the road up the hillside, we come after a few minutes to the remains of Penny Rigg Mill. This housed a giant watermill powering an ore-crushing and processing mill. Sadly, not much remains other than the collapsed walls.

On your right you’ll spot a deep cutting with a small stream flowing out, scraps of pipes and machinery littered around, and up ahead beneath the trees, the portal to the level at the bottom of a cliff.

Get your helmet and headlamp on and head in through the spacious entrance passage. The sunlight behind us begins to fade to a pinprick of light… 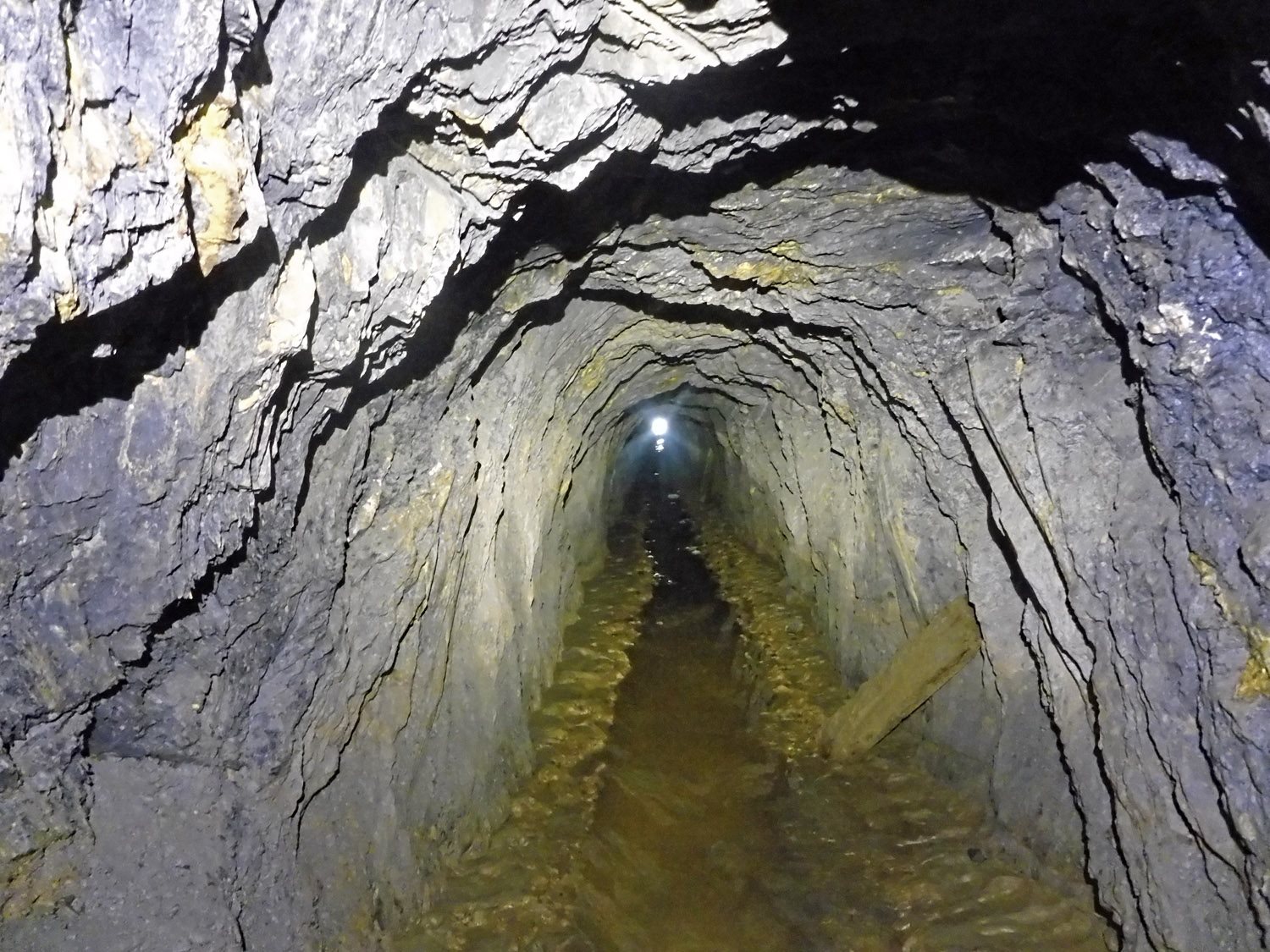 After 100 metres or so, a weir crossing the floor marks the entry into a vast chamber. This was a slate mine rather than what the level was initially driven for – copper. A nice chunk of slate was encountered along the way so a side hustle of slate was taken.

On the left, a huge stack of deads (waste rock) lines the passage, with a ladder propped up against it. The shelf above looks out over the chamber. 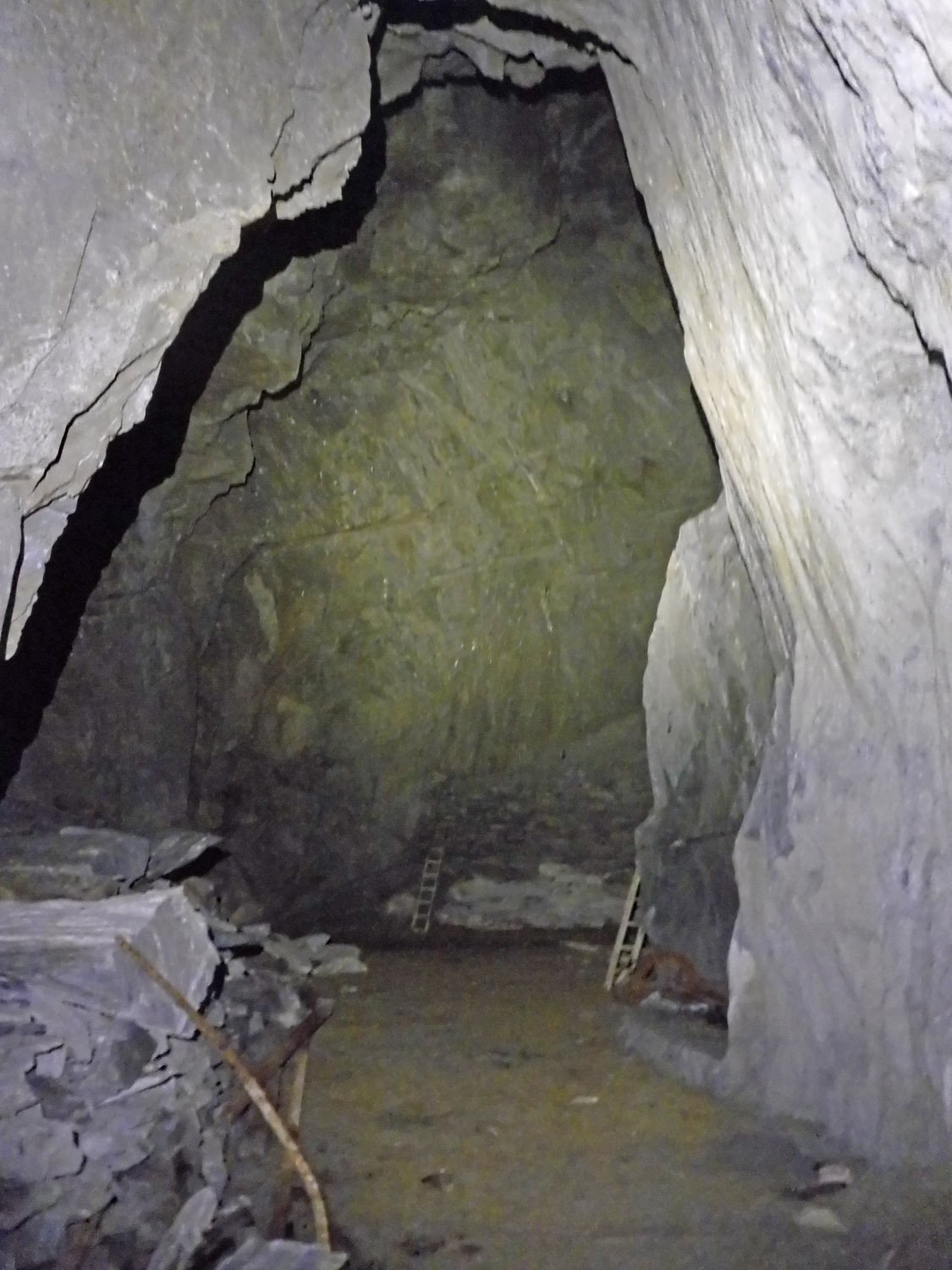 A rusting mine cart has been graffiti’d with a stark warning to anyone looking to proceed. 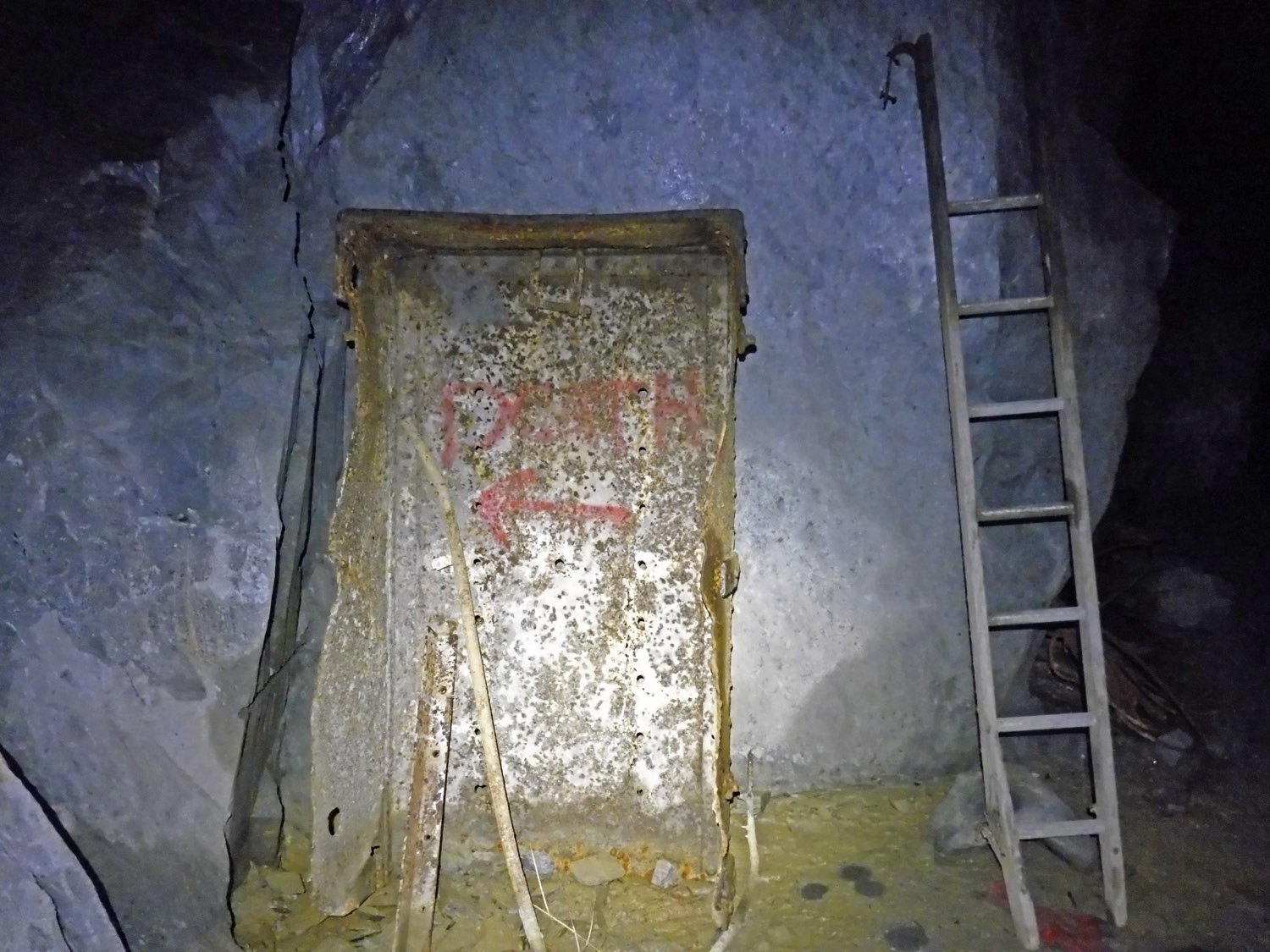 To the right, the cavern continues with a slightly lower roof; numerous bits of piping and ironwork lie in this side chamber, along with the railway sleepers just visible under the debris of mud and rocks lining the floor. 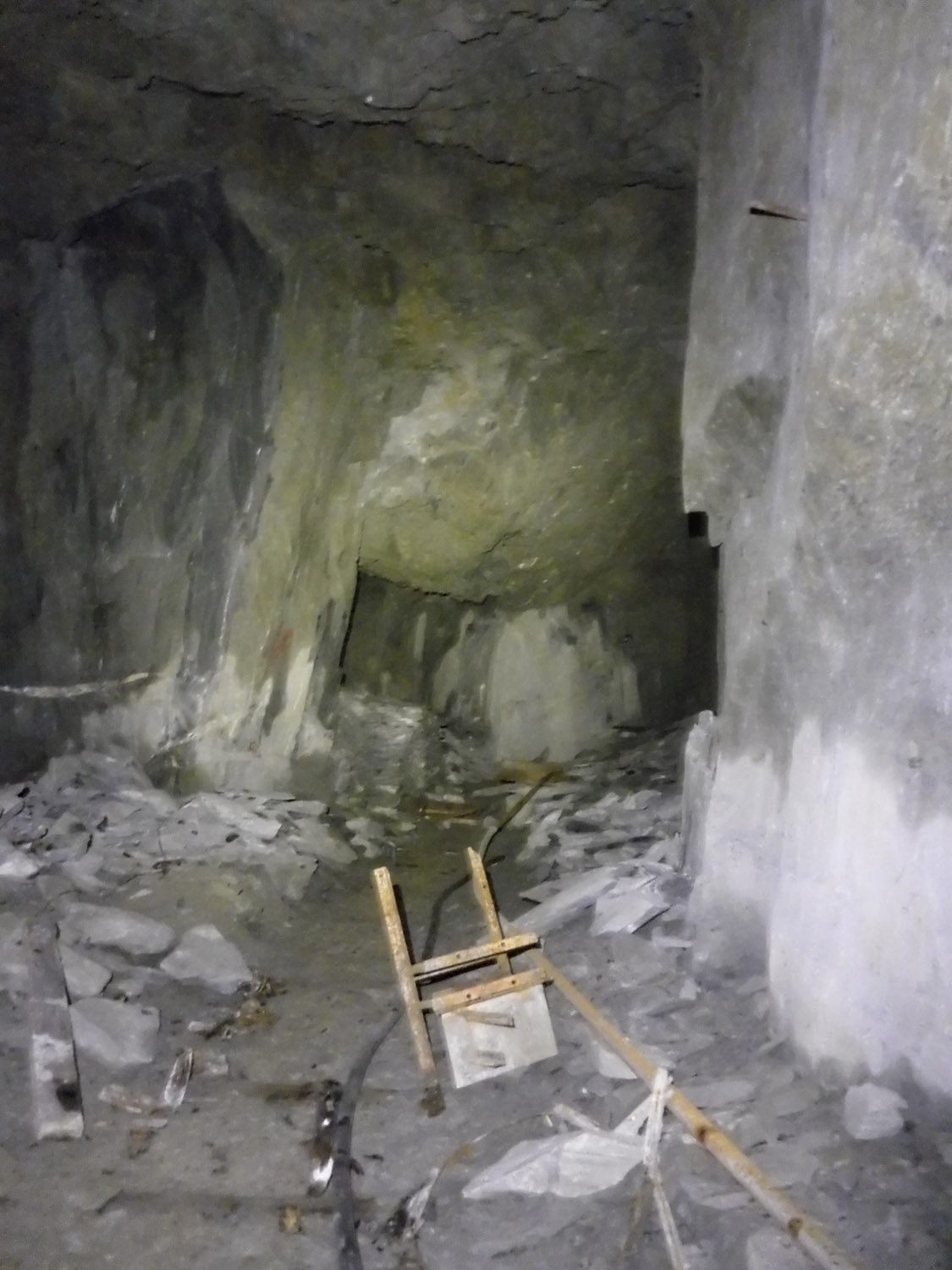 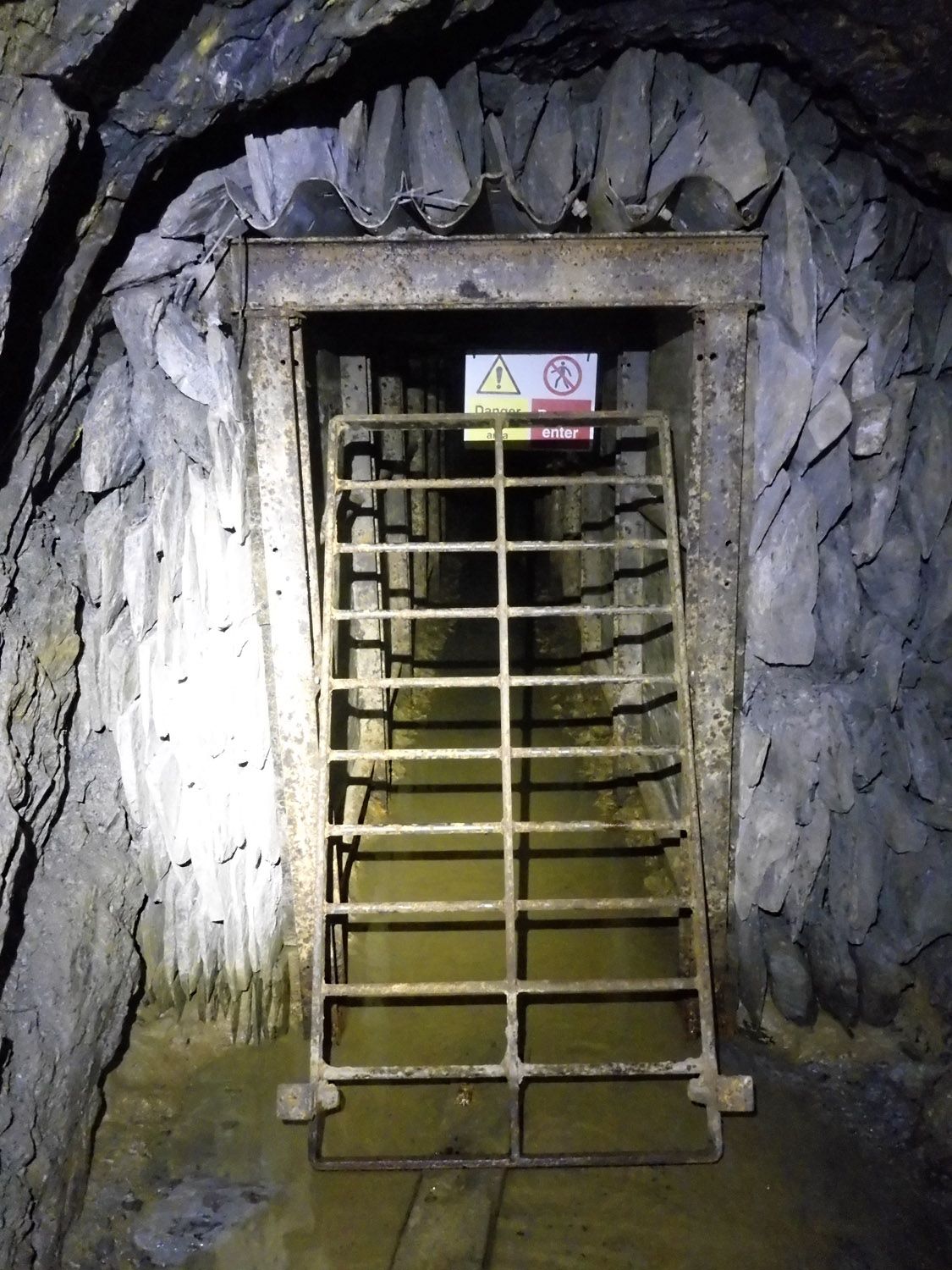 Following the main adit as it passes through the large caverns, the Horse Level continues on into the mountain. In fact, it’s been dug and repaired to over 1000 yards in length, with work in progress to continue attacking blockages in what could end up being a 2 kilometre-long passage. Large dumpy bags along a section of it show how much work went into unblocking this level. A relatively intact cart has been left on a short section of rails by CATMHS

As you eventually reach the end of the level, a ladderway in the roof gushes drainage water from stopes above. The ladder’s unusable, but supposedly further workings exist up here and may even extend to open stopes high above on the hillside. Here’s to hoping for a fantastic through-trip to eventually be created here.

CATMHS, the lovely folk who’ve spent a lot of time fixing up this level