It also lies on a continental divide, with rain falling on one side of the pass flowing to the Baltic Sea, and that falling on the other eventually reaching the Black Sea. 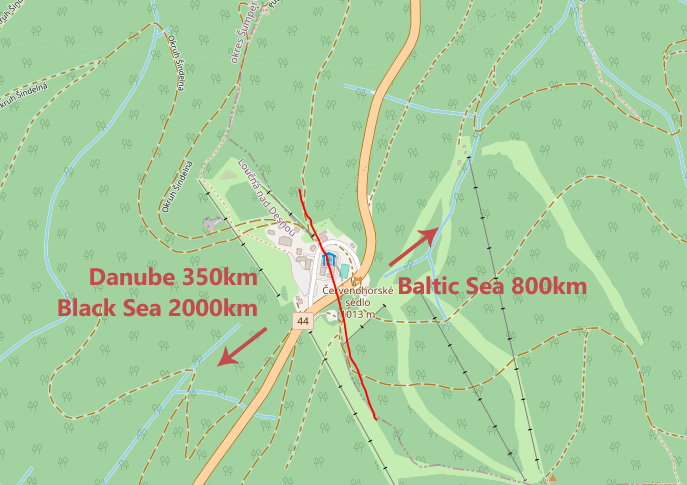 Cutting a road through the middle of the Jeseniky mountains’ main ridge means it’s an ideal spot to easily gain the ridge either way, with the bonus of a vehicular head-start. To the Northwest, Červená Hora itself, then Keprník. To the South, Velký Klínovec followed by a series of summits rising to Praděd at 1491m.

The best mapping for this route is available free on Mapy (mapy.cz). The red track runs both North and South – this is the main spinal track running along the main ridge of the Jeseniky mountains – a great long-distance route, a very long single day or a more leisurely 2-day hike. A stay in Červenohorské Sedlo is roughly half way along this route. The blue route provides an alternative, more evenly-graded and evenly-surfaced alternative for the first couple of miles of the Southward direction.

The route starts at the end of the hotel buildings furthest from the main road – a track heads up to the left, easily identified with the red markers. This initially doglegs easily up the ski slopes, passing a tiny chapel along the way (Památník obětem hor). You soon gain the long gradual ‘ridge’ heading up to Červená Hora. Passing the tops of two drag-lifts of the ski area, the track winds up first to Pod Bílým sloupem then to the white post of Bílý sloup. Just beyond here, a small hiking path branches off right from the main track – this is worth the short detour as it goes straight up Červená Hora and gives some stunning views out over the Jeseniky plain. As the summit area opens up at a group of rocks, you’ll see the main track below you on the left.

Vozka and Keprník fill the view ahead, and when you’ve taken it in it’s time to head down to the col at Sedlo pod Vřesovkou before the slog up Keprník. An initially steep climb levels out as it traverses a long arm of Keprník, before joining the main bulk of the mountain for another final steeper climb. Keprník is quite a prominent mound so gives some great views unrestricted by some of the other rounded hummocks surrounding it.

From Keprník you have the choice to retrace your steps back along the ridge to your car, or to carry on all the way over to Ramzova. A linear walk can be made of this with a bit of planning – trains run to Kouty below CHS, and to Ramzova at the end of the walk. Bus it up from Kouty station to CHS and train back round from Ramzova to Kouty to get the car. It’s not quite a slick operation, but it’s doable.

This route is a little more panoramic than the Northward route, with steep forested slopes dipping away on the right side of the ridge, and the broad valley of Jesenik open on the left. Of the two initial tracks available, the red one is more interesting – initially climbing on the service tracks of the ski area, before breaking off into a hiking trail up through the forest. The sometimes stunted and gnarly forest feels ancient, like everything that’s here, is so because it’s evolved to deal with the terrible hand that the weather has dealt it.

The shelter at Klínovec provides an opportunity for a short detour to the first summit on this ridge, before continuing. Amazing views into the deep wooded valleys open up on either side, and there’s usually some kind of interesting cloud effects from two different masses of air meeting. Tall stakes driven along this path offer mysteries – is this an ancient processional route of some kind?

The route generally runs along the highest part of the ridge, with the blue forestry track shadowing it a little lower down. The eventually converge at Slatě on Malý Děd – the lower blue track. The two continue as a road to run the final hillside traverse to grandfather Praděd, with its monster transmitting aerial and nearby ski area, it feels a little less than wild up here sometimes.

From here, either retrace your steps back along the ridge to your car, or if you’ve planned the smart option – park at the bottom of the CHS road climb (at a bridge) – get the bus up to CHS, walk to Praděd, then descend the gully of Divoký důl – this is one of the most spectacular and rugged parts of the Czech mountains, and gives a varied and thrilling steep descent down to the lower reservoir of the Dlouhe Strana pumped storage power station. A long but gentle stroll down with the Desna river leads you through a beautiful silent valley back to your car. 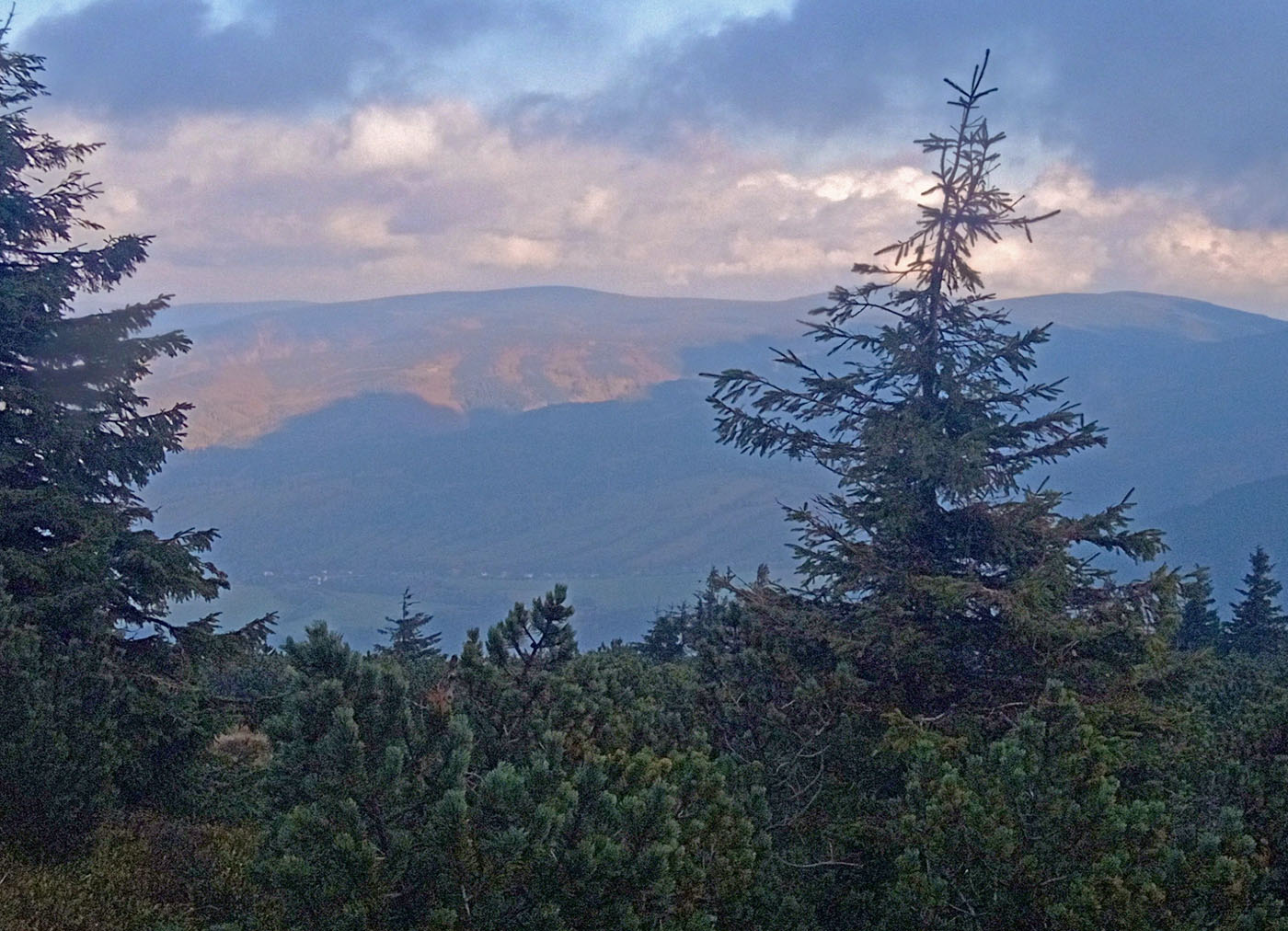