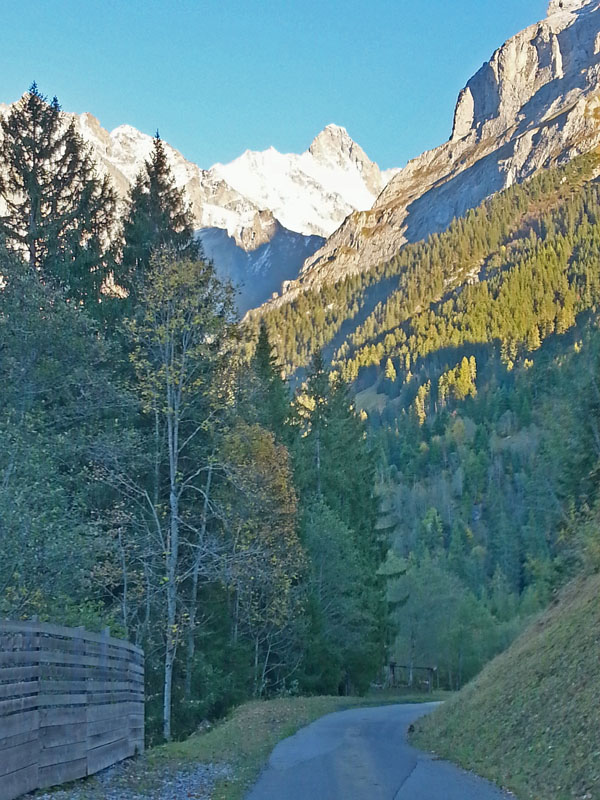 Finding myself in Switzerland for a few days visiting friends, I took the opportunity to pop up to Grindelwald in the Bernese Oberland of Switzerland to see what all the fuss about the scenery was. It lived up to expectations and I can’t wait to visit again sometime.

Now I’m a lazy guy and sometimes when I hike in the Alps I like to make use of the various lifts to get a boost up the mountain and see things I might not normally get the time or effort to see if I had to start from the valley floor. And today was no exception – I bought a one-way ticket on the rack railway up to Kleine Scheidegge, a small hamlet at the top of the pass between Grindelwald and Wengen so I would mostly be walking downhill. No shame. 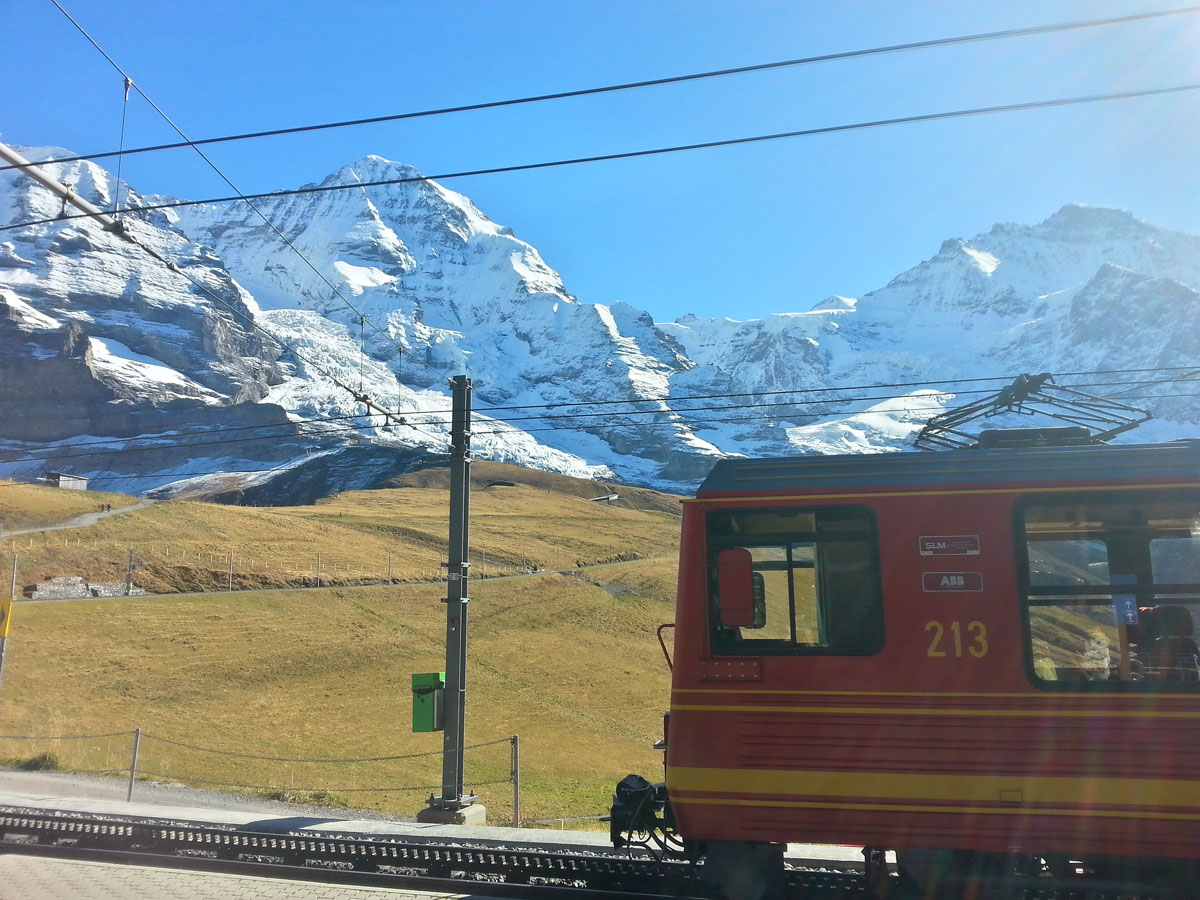 I was glad to get away from the tourist bustle at the top of the railway, and headed up alongside the Jungfrau railway winding its way up to the highest train station in Europe, Jungfraujoch at 3454 metres perched near the summit of the Jungfrau high above. 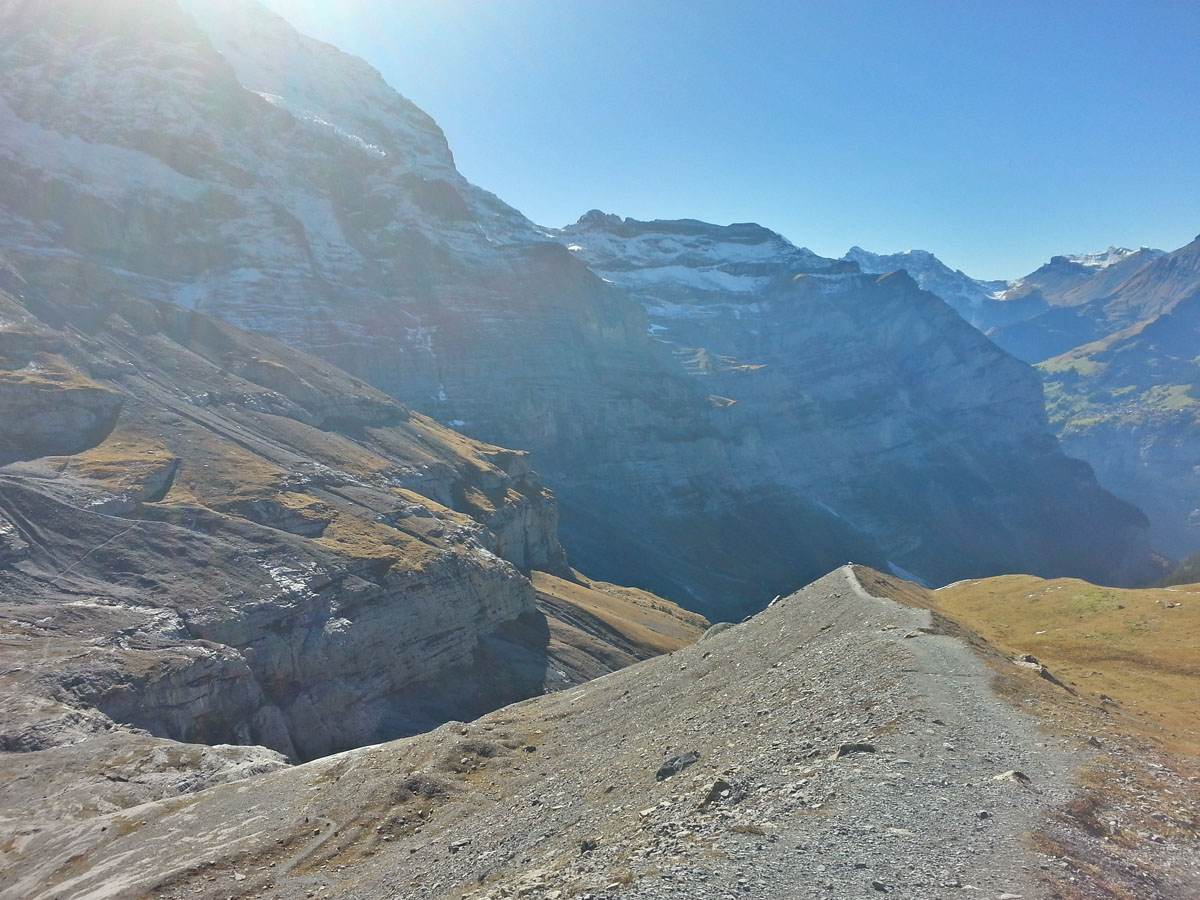 I reached the Eigergletscher station, the last open-air station before the railway plunges underground into the Eiger to begin its climb. Stunning views here as the glacier hangs over you reaching above you at a scale your eyes can’t work out. 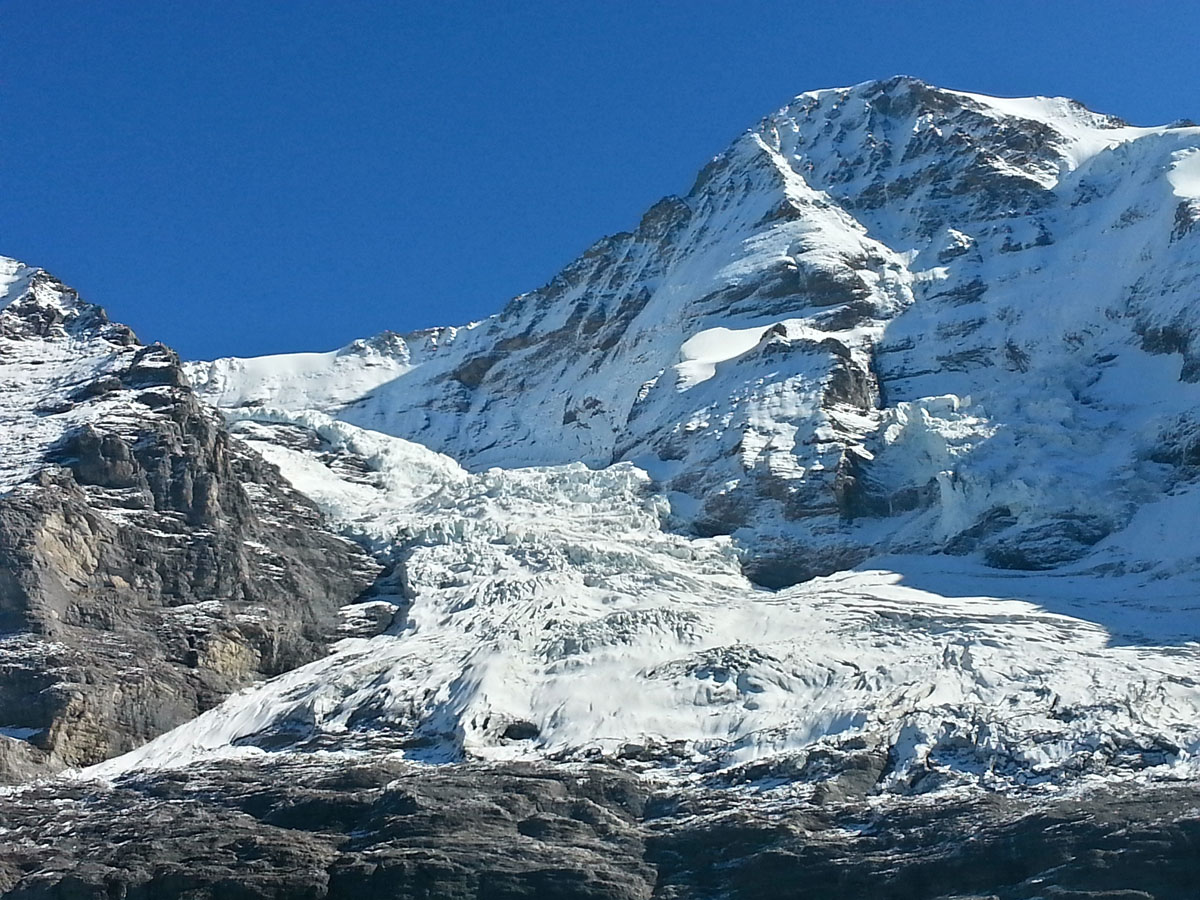 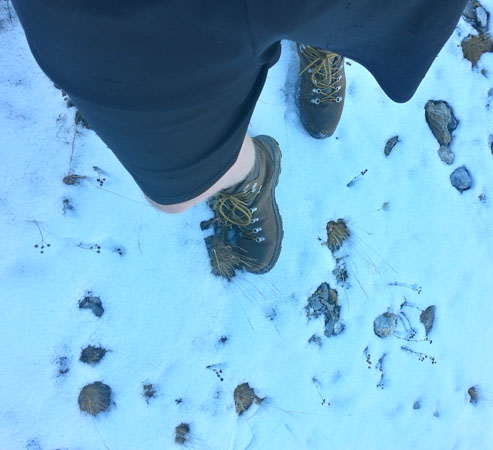 But from this point it was time to break away from the railway and head straight out across the bottom of the infamous North Face of the Eiger.

The first section was much trickier than I had planned for, with my shorts, t-shirt and standard-issue hiking boots. It was only October when I visited, but already a sprinkling of snow covered the ground at this level, and being in the shadow of the Eiger the air was a little chilly. Ideally I’d have had Crampons for this first section as much of it was like polished glass, but the stakes were low if I were to take a slip here – the slope below the path wasn’t steep enough to cause an uncontrollable slide so I decided to crack on across it and get into the sunshine and below the snowline. 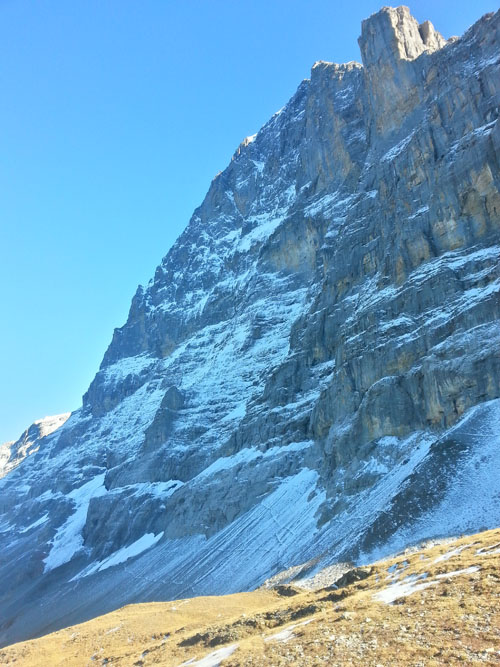 All went well and as the sheet ice disappeared I could really start to appreciate the 360 spectacular views – to the right, the kilometre-high vertical wall of rock and ice that is the North face, with a few nutters dangling around on the lower pitches. Ahead, the Wetterhorn rising sheer above the valley below. And to the left, the village and valley of Grindelwald spread out below me, backed by more sharp summits.

The path is well maintained and obvious, and I passed just a couple of people for most of the walk. Far from any other trails or infrastructure, it was a serene and silent route with just the occasional shriek from a bird of prey. It’s a lot warmer once out of the shadow of the Eiger and my feet begin to get a bit cheesy. 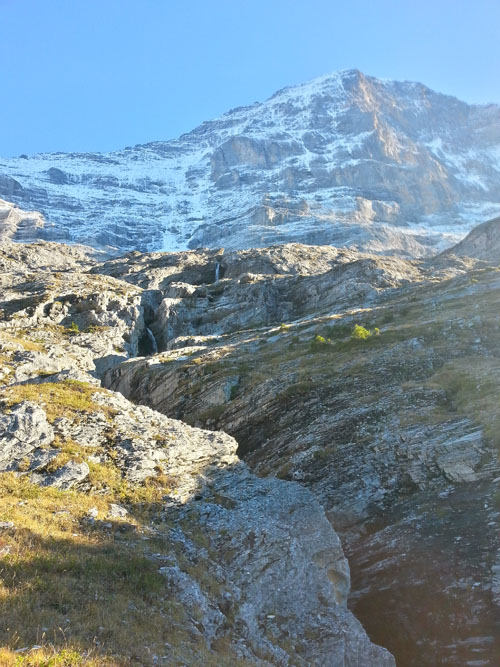 Waterfalls cascade down from their feeding glaciers high above, and I took a refreshing toe-dip in one of the plunge pools, and had a sarnie.

The path began to zigzag as it descended steeply into the forests, and branched into a few different options back to Grindelwald village. I reluctantly took the second-longest route back down from here, as the longest would have got me back to the car after my parking ran out. It swung me onto shallower slopes following alongside the Grindelwald to Kleine Scheidegge train that I rode up earlier in the afternoon. 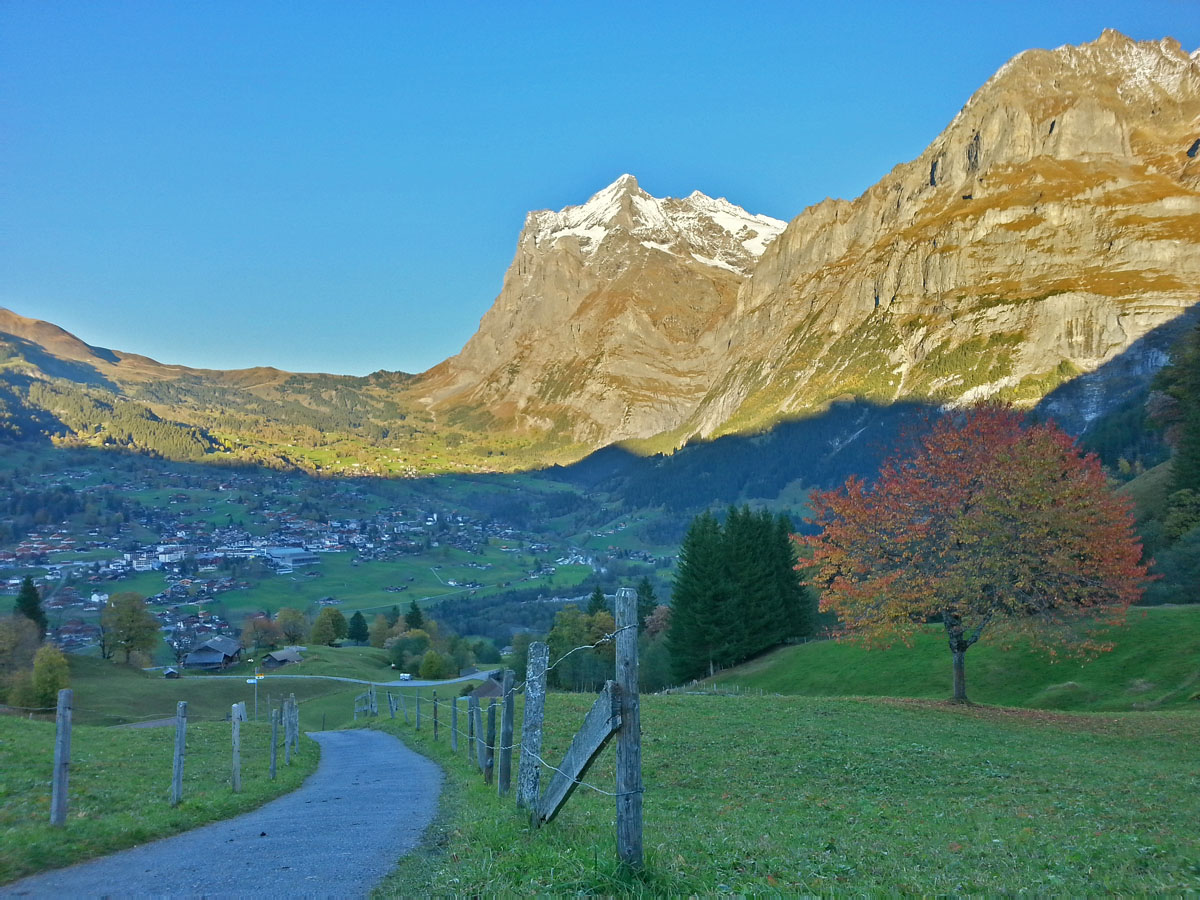 More and more civilisation was encountered as the paths turned into tracks, then roads, then alleys winding down the hill between barns and ski chalets. And the walk ends right back where you started – at the base station of the rack railway. Time for some hearty Swiss food and a pint of Oberland! Total time on the mountain was about 5 hours, walking very leisurely and taking plenty of pics.